Jehovah’s Witnesses and the Flag 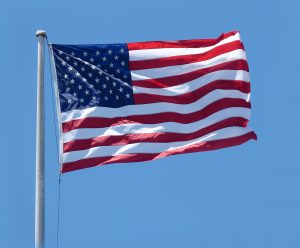 The Watchtower teaches that it is wrong for a Christian to salute any nation’s flag. The 4th of July is a good occasion on which to examine this dogma.

The Watchtower teaches that “bowing down to a flag or saluting it, often in conjunction with an anthem, is a religious act that ascribes salvation, not to God, but to the State or to its leaders” (God’s Love, 2008, pp. 212-213).

Notice that it equates saluting a flag with bowing down to it. It compares the act to Nebuchadnezzar’s command that everyone in Babylon bow down to the golden image he erected. Godly Jews refused to obey this command, even on pain of death.

But let’s read the exact command from Daniel 3:4-5: “You are commanded, O peoples, nations, and languages, that when you hear the sound of the horn, pipe, lyre, trigon, harp, bagpipe, and every kind of music, you are to fall down and worship the golden image that King Nebuchadnezzar has set up…”

They were commanded to worship that image. Is saluting the flag the same as worshiping it? The Watchtower says it is.

It quotes historian Carlton Hayes: “’Men bare their heads when the flag passes by; and in praise of the flag poets write odes and children sing hymns.’ Nationalism, he added, also has its ‘holy days,’ such as the Fourth of July in the United States, as well as its ‘saints and heroes’ and its ‘temples,’ or shrines. In a public ceremony in Brazil, the minister general of the army acknowledged: ‘The flag is venerated and worshiped . . . just as the Fatherland is worshiped’” (Same source, p. 212).

This is a typical Watchtower tactic. Find a quotation that stakes out an extreme position and then cite it as the definitive word on the subject.

I think we would agree that if a person can’t salute a flag without worshiping the flag itself or the country it represents, they shouldn’t do it. The problem is that the Watchtower doesn’t leave the matter to the conscience of the individual Witness. It issues an ironclad rule.

It proclaims as a certainty, “The flag is the symbol of the State. Therefore, bowing down to it or saluting it is a religious ceremony that gives reverence to the State. Such an act ascribes salvation to the State and does not harmonize with what the Bible says about idolatry” (The Watchtower, 9/15/02, “Salvation Belongs to Jehovah,”  p. 22).

Let me ask this personal question. If you salute your country’s flag, are you personally ascribing salvation to the State? Of course not. No matter. The Watchtower has spoken, and for Jehovah’s Witnesses, that settles it.

In support of its directives, the Watchtower has made several legalistic rules which Jehovah’s Witnesses are required to accept and obey.

It says, “Today, flags are usually saluted with outstretched arm or with the hand held to the forehead or over the heart. At times, some special bodily position may be assumed. In some lands, children at school are expected to kneel and kiss the flag. By standing quietly while others salute the flag, true Christians make it evident that they are respectful observers (same sourse, pp. 23-24).

Is this claim true? Wouldn’t most outsiders who see Jehovah’s Witnesses standing but not saluting the flag assume that they are disrespecting both the flag and the country it represents?

The Watchtower goes on to decree:

What if a flag ceremony is conducted in such a way that simply standing gives evidence of participation? For example, suppose one student in a school is selected to represent the whole school and he salutes the flag outside at a flag pole while the other students are expected to stand at attention inside the classroom. The mere act of standing in this instance signifies agreement with having the student on the outside act as a personal representative in saluting the flag. Standing in any manner would then denote joining in the ceremony. If this is the case, those desiring to be only respectful observers would remain quietly seated. What if the class is already standing as such a ceremony starts? In this case, participation would not be indicated if we were to remain standing.

Suppose one is not asked to salute the flag but merely to hold it, either in a parade or in a classroom or elsewhere, so that others can salute. Rather than ‘fleeing from idolatry,’ as commanded in the Scriptures, this would actually mean being at the very center of the ceremony. The same is true of marching in patriotic parades. Because doing this would mean giving support to what is honored by the parade, true Christians conscientiously decline.

So in one circumstance, standing during a flag salute is impermissible participation. In another circumstance, it is perfectly acceptable. However, holding the flag or marching in a patriotic parade is automatically forbidden.

Imagine being a Jehovah’s Witness child in school and being expected to know and follow each of these regulations. Of course, what your actions mean to you and to the Watchtower may be the opposite of what non-Witnesses assume when they see what you are doing.

These rules serve to foster an us-versus-them mindset. For this reason, I strongly recommend that you not fall into that trap by adding fuel to the fire. Your goal is to show them Christian love and, if possible, lead them to saving faith in Jesus Christ, not to accuse them of lack of patriotism.

How should we respond to this when talking with Jehovah’s Witnesses? Here are my suggestions:

Have you ever discussed flag salutes with Jehovah’s Witnesses? Do you find my thoughts and suggestions helpful?