Getting Into “Bible Teach” 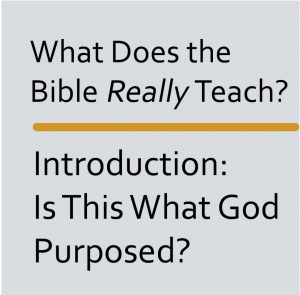 The “Bible Teach” introduction, entitled “Is This What God Purposed?”, begins by asking you to think about crime, war, terrorism, illness, and death. Is this God’s plan for mankind? Will we ever see peace on earth? It promises that the Bible has satisfying answers for these questions. (p. 3 in the paperback edition; this introductory chapter doesn’t have numbered paragraphs).

Verse quotations and photos of ecstatic people (pp. 4-5) cast a vision of healing, resurrection of the dead, and a paradise earth.

The chapter goes on to say (p. 6) that the Bible can help you deal with your current problems and answer your questions about suffering, anxiety, what happens after death, and finding assurance that God will keep his promises about the future.

This is a good point to tell them that you believe the Bible is God’s inspired and infallible Word and that there is no other book like it. This will build bridges with them and at the same time it will allow you later to establish a contrast between the Bible and fallible Watchtower literature.

The chapter then introduces the reader to the book’s study questions, stating, “Millions have enjoyed using the question-and-answer method when discussing the Bible with Jehovah’s Witnesses.” (p. 7)

This seemingly innocuous statement is setting you up to accept the role of a passive student who studies the book and learns to recite the Watchtower’s answers to the Watchtower’s questions.

In an earlier post, “How Witnesses Hope Your Meetings Will Go”, I warned you against falling into this type of passivity.

It’s at this point that I recommend saying, “Actually, I think I learn best when I ask my own questions. I tend to ask a lot of questions about everything I read.

Most likely, they will praise you for being an active, questioning student.

Despite that, as the book study progresses, they will try to get you to focus less and less on your own questions and more and more on the questions provided in the book.

They will ask you to defer your questions until later, promising that the book will eventually answer them. However, since you will have read the entire book already, you can tell them, “I’ve read the book, and this is the point at which I’d like to hear your answers to this question. I learn best when the question is fresh in my mind.

The final paragraph of the introduction (p. 7) says, “You will quickly become familiar with the Bible by looking up the scriptures cited in this publication.”

Don’t accuse the Witnesses of anything, but be aware that the Watchtower frequently states its doctrines and then cites verses or parts of verses without any surrounding context as if the Bible were in full accord with the Watchtower teaching.

In previous posts, I have explained this in some detail and have given specific examples of how to counter it.

At this point, you can ask, “Do you believe that Watchtower publications like this book are inspired or infallible like the Bible?” They will say no. Then ask, “Why do we need uninspired literature to explain an inspired book?[i] Wouldn’t it be better just to study the Bible itself?”

Suggest that they lead you through a study of an actual book of the Bible in its context—such as Romans (the first epistle in the Bible) or Galatians (the first short epistle).

Almost certainly, they will insist on using their study book.

You can note that you are willing to have them teach you out of the Bible itself and to listen to their explanations.

When they insist on using their study book, it should trouble them that you are willing to go strictly by the Bible while they require outside literature.

[i] Based on “Quick Question #23 for Jehovah’s Witnesses,” Keith Walker, YouTube

Establish Your Right to Ask Anything