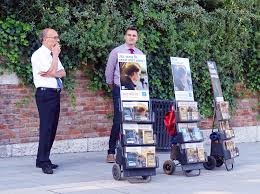 According to Watchtower statistics, more than 165,000 literature carts have been supplied to congregations of Jehovah’s Witnesses throughout the world.[1]  Their literature is available to passersby free of charge. This method of outreach is used mainly in high foot traffic metropolitan areas.

The carts are usually staffed by two Jehovah’s Witnesses working in shifts throughout the day. They don’t usually initiate conversations with passersby, and most of the time no one talks with them.

Even if the Witnesses don’t say anything to try to draw people to the carts, they will respond to comments and questions.

If you want to expand your witnessing opportunities, take the initiative by stopping at the cart and talking with them.

If you aren’t ready to engage in a heavy religious discussion, just get acquainted with them. Ask them what they do for a living, how long their cart shifts are, how long they have been Jehovah’s Witnesses, and the like.

Be prepared to answer similar questions about your own occupation and religious background.

If that is all you do, you will have done more than most Christians do by showing them genuine Christian love and concern.

If you want to go further and engage them in discussions, you have two options.

You can try to set up further meetings elsewhere or you can talk with them at the cart and leave it at that.

If you strike up a conversation with them, you may be able to set up a series of meetings with them—if not in your home, then perhaps in a public place such as a nearby coffee shop or restaurant.

Don’t lie to them by saying that you are interested in becoming a Jehovah’s Witnesses. Just tell them that you would be interested in hearing in more detail what the similarities and differences are between your faiths.

If you try to arrange meetings in your home, be aware that you may end up talking with a different pair of Jehovah’s Witnesses. This is especially likely if the Witnesses who are staffing the cart don’t attend the Kingdom Hall located closest to your residence.

A one-time only encounter at the cart

If you want to limit your interaction to a single encounter at the cart, that’s fine.

First find out how much time they have left in their shift so you don’t end up initiating a deep conversation only to have them switch off a few minutes later.

If you know in advance that you will be encountering Witnesses who are involved in cart work, you can prepare one of the approaches I’ve discussed in this blog or in my book, Getting Through to Jehovah’s Witnesses: Approaching Bible Discussions in Unexpected Ways.

I would recommend “The Come to Jesus Approach” approach or “The Faith and Works Approach.” You won’t have time to work through the entire approach in an hour or less, but you can select one aspect of the approach to concentrate on and focus on planting a gospel seed.

Leaving a card for each Witness

This “card approach” is only to be used if you haven’t had time to get into a Bible discussion at the cart but want to give them some sort of Christian witness. It involves writing out in advance identical cards to give to each of them.

Before you give them a card, first pause a moment and take some of their free literature (you don’t have to read it unless you want to).

Give them the cards in return.

I recommend that all you put on the cards are the addresses of two websites—www.4jehovah.org and www.jwfacts.com —along with your own contact information.

Check out each of these sites yourself before doing this so you can tell the Witnesses you have looked at them out of curiosity and would be interested in their thoughts in response so you can get both sides of the story.

The first website was created by Christians who are former Jehovah’s Witnesses who are trying to reach Witnesses with the gospel.

The second website is not run by Christians, but it contains many citations to older Watchtower literature which documents the organization’s false prophecies and doctrinal changes.

Although recommending either of these “apostate” websites to a Witness in your living room would most likely produce antagonism that would stop them from having further meetings with you, there is little downside to doing so with Jehovah’s Witnesses whom you are only planning to encounter once in the course of their cart ministry.

A word of warning: Jehovah’s Witnesses who are obeying the Watchtower will not visit those sites (because they are “apostate”) and will probably just throw the cards away after you leave, but it’s possible that you may get through to one or both of them if they are harboring secret doubts or if they are at least willing to investigate.

Going to a Kingdom Hall