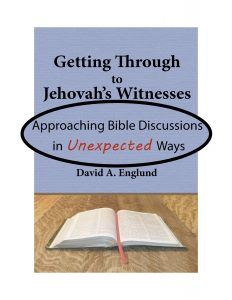 Why should you do the unexpected when discussing Bible doctrine with Jehovah’s Witnesses?

Because if you don’t, they will just recite their Watchtower talking points and you won’t get through to them.

The Watchtower trains them in how to present Watchtower doctrines. It also tells them what you and I are likely to say and informs them how to respond.

I found this out the hard way many years ago. I was particularly frustrated when my conversation with some Jehovah’s Witnesses was going nowhere. I felt as if I were talking to a Watchtower magazine instead of to human beings.

Then it dawned on me that that’s exactly what was happening. The Witnesses weren’t really considering anything I was saying to them. They were simply reciting their familiar Watchtower presentations.

I found out years later that many Witnesses actually put the Watchtower’s small doctrinal manual, Reasoning from the Scriptures, into the backs of their Bibles. That way, when they talk with people like us it looks as if they are getting their information from the Bible. In reality, they are simply regurgitating prepackaged Watchtower talking points.

Because of this, my book, Getting Through to Jehovah’s Witnesses, contains dozens of approaches, each of which comes at the topics in unexpected ways in order to get Witnesses off autopilot and into genuine discussions where they actually have to think about what we’re saying.

In fact, I gave the book the subtitle, “Approaching Bible Discussions in Unexpected Ways.”

Let me give you an example.

Jehovah’s Witnesses don’t believe that Jesus is God. They believe he is a lesser god who is the first and greatest creation of God the Father (Jehovah).

When Christians try to show Jehovah’s Witnesses that Jesus—as well as the Father—is Almighty God, the first passage that comes to mind is John 1:1, 14: “1 In the beginning was the Word, and the Word was with God, and the Word was God… 14 And the Word became flesh and dwelt among us, and we have seen his glory, glory as of the only Son from the Father, full of grace and truth.”

Sorry, it’s not that easy.

Most likely, you know little—if anything—about the Greek language in which John’s gospel was originally written. Neither do Jehovah’s Witnesses. Nevertheless, they believe the Watchtower’s leaders are great Bible scholars, and they will give you a standard Watchtower argument straight out of the Reasoning book I mentioned earlier (pp. 212-213):

Does John 1:1 prove that Jesus is God?

What is it that these translators are seeing in the Greek text that moves some of them to refrain from saying “the Word was God”? The definite article (the) appears before the first occurrence of the·osʹ (God) but not before the second. The articular (when the article appears) construction of the noun points to an identity, a personality, whereas a singular anarthrous (without the article) predicate noun before the verb (as the sentence is constructed in Greek) points to a quality about someone. So the text is not saying that the Word (Jesus) was the same as the God with whom he was but, rather, that the Word was godlike, divine, a god. (See 1984 Reference edition of NW, p. 1579.)

What did the apostle John mean when he wrote John 1:1? Did he mean that Jesus is himself God or perhaps that Jesus is one God with the Father? In the same chapter, verse 18, John wrote: “No one [“no man,” KJ, Dy] has ever seen God; the only Son [“the only-begotten god,” NW], who is in the bosom of the Father, he has made him known.” (RS) Had any human seen Jesus Christ, the Son? Of course! So, then, was John saying that Jesus was God? Obviously not. Toward the end of his Gospel, John summarized matters, saying: “These are written that you may believe that Jesus is the Christ, [not God, but] the Son of God.”—John 20:31, RS.

Suddenly you find yourself in the midst of a fruitless discussion about Greek anarthrous predicate nominatives.

Even if you are a Greek scholar who can completely refute what the Witnesses are telling you, the Witnesses will believe that some of the Watchtower’s worldwide leaders are even better Greek scholars, and they’ll continue believing that John 1:1 should be rendered—as the Watchtower’s New World Translation does—“In the beginning was the Word, and the Word was with God, and the Word was a god.” (emphasis added).

Knowing that this is a standard Watchtower response which every Jehovah’s Witnesses has been indoctrinated to believe and to present, my preference is to avoid John 1:1 entirely. Instead, I cite passages and arguments for which Witnesses aren’t prepared.

In that way, all of their training about John 1:1 goes for naught, and they are forced to think about other passages they weren’t expecting.

If you are interested in the details of my approaches to the deity of Christ, look at two chapters in my book—Chapter 12 (“The Jesus Isn’t Michael Approach”) and Chapter 13 (“The Jesus is the God-Man Approach.”)

2 Comments on "Do the Unexpected"

Ah, but the definite article does NOT appear before ‘the-os’ in OTHER scriptures which clearly refer to God the Father. Thus the argument is moot!

That whole Greek anartharus whatever whatever is a diversion that, more than likely, most JW’S don’t have clue one about. There are a couple of verses in their own bible that can be used to at LEAST make them think outside the wt indoctrination ‘box’ . John 14:1 in their version Jesus says that we are to exercise faith in him even as they exercise faith in God. Either way, you could ask, “A bit arrogant, don’t you think, that Jesus would suggest that he is worthy of the same faith that one would exercise in God?” And John 5:23… Read more »
Reply   -   Share