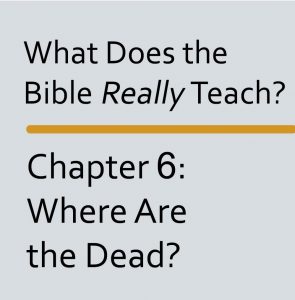 “For the living are conscious that they will die; but as for the dead, they are conscious of nothing at all, neither do they anymore have wages, because the remembrance of them has been forgotten.” (Ecclesiastes 9:5, Watchtower’s New World Translation, 1984 edition)

This verse is probably the Witnesses’ favorite proof text referring to the afterlife. They frequently quote only a few words from it—“the dead… are conscious of nothing at all” or “the dead know nothing at all” (from the 2013 edition).

For them, this definitively excludes the possibility of human beings having a soul or conscious spirit that survives the death of the body.

In the Watchtower Bible version, Psalm 146:4 reads: “His spirit goes out, he returns to the ground; on that very day his thoughts perish.” The Watchtower quotes this verse in isolation as if it were speaking about the condition of the dead. However, the context is verse 3: “Do not put your trust in princes, nor in a son of man, who cannot bring salvation.” The passage isn’t talking about whether people have souls or spirits which are still conscious after death. It is simply explaining why we shouldn’t place our trust in powerful men. They die and are buried, and all their plans and promises die with them.

Paragraph 7 (p. 59) notes that in John 11:11-14, Jesus compared his friend Lazarus’ death to rest and sleep and claims that while he was dead Lazarus was aware of nothing until Jesus raised him to life again.

The simple reply is that Jesus wasn’t discussing the afterlife. “Rest” and “sleep” are euphemistic metaphors for death. The dead do look to us as if they’re asleep.

You might ask the Witnesses, “If Lazarus couldn’t hear or think, how did he hear Jesus’ voice and come out of the tomb when Jesus called to him? How will we?”

Paragraph 17 (p. 64) states the Watchtower’s position that the concept of an everlasting fiery torment dishonors God. You can respond by referring once again to Jesus’ account of the rich man and Lazarus, as well as asking them to read aloud Revelation 20:10 in the Watchtower’s own translation: “And the Devil who was misleading them was hurled into the lake of fire and sulfur, where both the wild beast and the false prophet already were; and they will be tormented day and night forever and ever.”

A footnote in the Watchtower Bible claims that “tormented” means being “restrained” or “imprisoned.” That is a unique definition of torment, but even assuming that it were accurate, if a person is completely gone [as the Watchtower claims], in what sense is he being restrained or imprisoned? How can even God restrain or imprison someone who no longer exists?

Paragraph 17 (p. 64) makes this emotional argument: “How would you feel about a man who punished a disobedient child by holding his hands in a fire? Would you respect such a man? In fact, would you even want to get to know him? Definitely not! You would likely think that he was very cruel. Yet, Satan wants us to believe that Jehovah tortures people in fire forever—for countless billions of years!”

I would reply this way: “I think we can get into all sorts of error when we project our sentiments onto God. We could just as well ask what we would think of a father who executed a death sentence on his children because they ate one piece of forbidden fruit or who annihilated a disobedient child.”

Page 65 (p. 19) draws the chapter to a close with what I consider to be a strange comment: “…when you realize that people do not pass on to the spirit realm at death, the promise of everlasting life on a paradise earth takes on real meaning for you.”

I would respond, “I’m sorry. I don’t understand that at all. Why would the promise of everlasting life on a paradise earth have less meaning for someone who believes in an intermediate state where Christians go to heaven in spirit form to await the resurrection of their bodies?”

Next week, we’ll move into Chapter 7 of “Bible Teach”—“Real Hope for Your Loved Ones Who Have Died.”

What Are the Soul and Spirit?