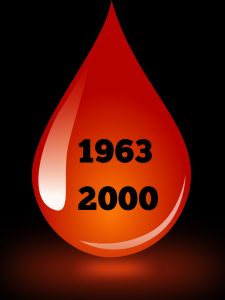 In last week’s post, I suggested a number of soundbite replies you might use in order to challenge the Watchtower’s ban on blood transfusions on scriptural grounds.

There’s another approach you can take, and that is to focus on the fact that the Watchtower has made significant changes in its teaching regarding blood.

The goal of this approach isn’t to challenge the Watchtower’s doctrine itself. Rather, the purpose is to highlight to the Witnesses the Watchtower’s unreliability on this issue of life and death importance to themselves and their families.

From 1963 until the year 2000, the Watchtower taught that the Bible strictly prohibits the taking of any substance derived from blood.

Here is what it said regarding which blood-related medical treatments a Jehovah’s Witness must refuse:

As to blood transfusions, he knows from his study of the Bible and the publications of the Watch Tower Society that this is an unscriptural practice… He need only ask the doctor… “Where did you get this substance”’ If the answer is ‘Blood,’ he knows what course to take, for it is not just whole blood but anything that is derived from blood and used to sustain life or strengthen one that comes under this principle.[i]

An obedient Jehovah’s Witness, accepting this as truth from God’s organization, would have died or let a spouse or child die rather than allowing a doctor to treat them with anything that is derived from blood.

However, in the year 2000, the Watchtower changed its teaching. Now it says that Jehovah’s Witnesses may take blood fractions if their conscience allows it, so long as they don’t take whole blood or any of four primary components of blood—red cells, white cells, platelets, or plasma.

You can find that article allowing the taking of blood fractions the Watchtower’s website. It is available in the Watchtower online library at JW.org.[ii]

Should Christians accept these fractions in medical treatment? We cannot say. The Bible does not give details, so a Christian must make his own conscientious decision before God.

Some would refuse anything derived from blood (even fractions intended to provide temporary passive immunity). That is how they understand God’s command to ‘abstain from blood.’ They reason that his law to Israel required that blood removed from a creature be ‘poured out on the ground.’ (Deuteronomy 12:22-24) Why is that relevant? Well, to prepare gamma globulin, blood-based clotting factors, and so on, requires that blood be collected and processed. Hence, some Christians reject such products, just as they reject transfusions of whole blood or of its four primary components. Their sincere, conscientious stand should be respected. Other Christians decide differently. They too refuse transfusions of whole blood, red cells, white cells, platelets, or plasma. Yet, they might allow a physician to treat them with a fraction extracted from the primary components. Even here there may be differences. One Christian may accept a gamma globulin injection, but he may or may not agree to an injection containing something extracted from red or white cells.[iii]

While it is good that the Watchtower has eased up in this area, the fact remains that the organization’s leaders control the lives of Jehovah’s Witnesses, sometimes to the point of requiring them to die for Watchtower teachings which can change at any time.

Based on the 2000 change, you might be able to get Jehovah’s Witnesses to question the Watchtower’s reliability using several soundbite comments and questions.

“From 1963 to 2000, anything derived from blood was forbidden to Jehovah’s Witnesses. Now blood fractions are allowed. What changed in the year 2000? The Bible didn’t change.”

Most likely the Witnesses will cite Proverbs 4:18, which says that the path of the righteous is like a light that gets brighter and brighter.

In response, you can note that Jehovah’s Witnesses are usually known for their total unity on matters of doctrine but that this change means that individual Witnesses may make completely different life and death decisions regarding blood fractions. Here is how you can focus on that point:

“If the light gets brighter as time goes by, why is there less certainty and less unity on this matter amongst Jehovah’s Witnesses now than there was before?”

Jehovah’s Witnesses rarely think of the impact of Watchtower changes on Witnesses who suffered greatly because of blind obedience to its earlier teachings. You can get them to consider it in the following manner:

“I can’t help thinking about how I would feel if I let my child die without needed blood fractions because the Watchtower said it was required by Jehovah, only to have them come out a few months later and say that taking those life-saving fractions was not forbidden by Jehovah after all.”

You can conclude by honing in on the key issue—the potentially fatal consequences of blind adherence to the changing teachings of fallible men.

“Please help me understand why you or I or anyone should allow people whose important doctrines change that kind of life-and-death control over our children’s lives.”

Have you ever discussed with Witnesses some of the changing life and death directives of the Watchtower? Do you think some of these soundbites might be helpful in your discussions?

When I talk to JWs they always seem to have an answer for everything. It’s so hard talking two against one. I really wish they would not insist on talking in two’s. I know that if I could get them to talk to me one on one, it would make all of the difference.

I understand your frustration. There are a couple things you can do. One is to have someone else with you, even if they say nothing and just provide moral and prayer support. After all, if they can have two, why can’t you? Another thing is to recognize that when one JW gets in trouble the other one often jumps in to bail him out. Listen, but then politely say, “I really would like to hear (the one who dropped out)’s answer to that question.” If the one who took over changed the subject (as often happens), say something like, “I’ll… Read more »
Reply   -   Share