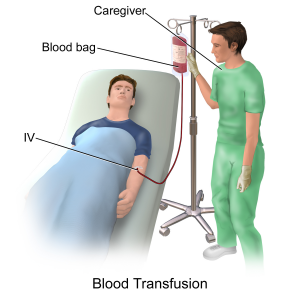 Jehovah’s Witnesses are predictable in the points they make in support of the Watchtower’s ban on blood transfusions.

Let’s look at what they will tell you and come up with good soundbite responses.

You can set the tone for your discussion by beginning with a brief quotation from Jesus himself: “Nothing from outside a man that enters into him can defile him; but the things that come out of a man are the things that defile him.” (Mark 7:15)

What you are likely to get in response are standard Watchtower arguments justifying its blood transfusion ban. Here is what Witnesses will tell you and how I recommend you respond.

Also ask, “How could the Bible have been referring to the lifesaving medical procedure of blood transfusion, given that they didn’t even become possible until thousands of years after the Bible was written?”

You can follow up with this soundbite: “If it cost the donor his life in order to provide blood for transfusions, I might understand the Watchtower’s opposition. But it doesn’t. The donors aren’t killed. They aren’t even harmed.”

Most likely, Witnesses will simply reiterate their proof texts.

Watchtower Argument #2: A blood transfusion is the same as eating blood.

The Watchtower’s asks: “Is a transfusion really the same as eating blood? In a hospital, when a patient cannot eat through his mouth, he is fed intravenously. Now, would a person who never put blood into his mouth but who accepted blood by transfusion really be obeying the command to ‘keep abstaining from… blood’? (Acts 15:29) To use a comparison, consider a man who is told by the doctor that he must abstain from alcohol. Would he be obedient if he quit drinking alcohol but had it put directly into his veins?”[i]

You can respond with this soundbite: “The two aren’t comparable at all. Blood eaten by mouth is being used as food, but blood transfused intravenously is joining the existing bloodstream and is being used for the very purpose for which God designed it.”

Watchtower Argument #3: The transfusion ban respects the sanctity of life.

The Watchtower says, “Out of respect for the sanctity of life, godly people do not accept blood transfusions, even if others insist that such a procedure would be lifesaving.”[ii]

Believe it or not, Jehovah’s Witnesses see no irony in this claim.

In Matthew 23:17, Jesus upbraided the scribes and Pharisees with the following soundbite: “Fools and blind ones! Which, in fact, is greater, the gold or the temple that has sanctified the gold?”

You can make similar responses to the Watchtower’s “sanctity of life” argument:

The Watchtower states: “… only sacrificial use of blood has ever been approved by God, and that since the animal sacrifices offered under the Mosaic Law foreshadowed the sacrifice of Christ, disregard for the requirement that Christians ‘abstain from blood’ would be an evidence of gross disrespect for the ransom sacrifice of Jesus Christ…”[iii]

You can respond with comments such as these:

It isn’t there. In fact, it was Jesus himself who was distraught by the Pharisees’ legalistic view of Bible commandments.

Remind them that it was Jesus who said in Mark 3:4, ‘Is it lawful on the Sabbath to do good or to do harm, to save a life or to kill?’”

Ask, “Given Jesus’ question to the Pharisees in Mark 3:4 concerning breaking the Sabbath, how do you think he would feel about religious authorities who require people to die to uphold the sanctity of life rather than allowing them to have a life-saving blood transfusion?”

Have you ever discussed blood transfusions with Jehovah’s Witnesses? Do you think some of these soundbites might help you get through to them?

[i] Reasoning from the Scriptures, p. 73

Exalting the Name of Jesus

The one major issue that is never discussed is Pikuach Nephesh – provision, by God, to relax laws in order to preserve life. These can be dietary laws, blood laws, etc. Even Jews and Muslims allow the eating of pork in order to preserve and maintain life. They believe that only God gives and takes away life.