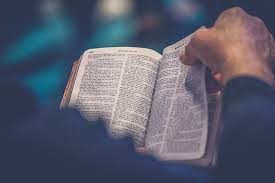 When you are about to discuss a passage of Scripture with Jehovah’s Witnesses, I recommend that you first ask them to read the verse or verses aloud from their Bibles.

If the passage is a long one, review it with them in smaller, more manageable segments rather than getting lost trying to analyze a lengthy passage all at once.

I’m not saying you should never do some of the reading yourself, but it’s best to have them do it as often as possible—especially with passages that are critical to the topic you are discussing.

Why do I recommend that you have them do the reading?

Let’s look at the alternatives.

Alternative #1: Not actually reading the passage because you assume you are all familiar with what it says

This is a temptation when you are about to discuss a well-known passage such as John 1:1 or Ephesians 2:8-9.

Make sure you all know what it says.

That’s good advice even if you are just thinking about a Bible text on your own.

It’s especially important when dealing with Jehovah’s Witnesses because the Watchtower translation often renders verses differently than recognized translations do.

Additionally, in its literature the Watchtower often states its doctrine and lists Bible citations without actually quoting the passage. Witnesses just assume the text supports the Watchtower’s teaching. Often, it doesn’t, so it’s good to get them in the habit of reading the text itself.

Alternative #2: Just having everyone read the passage silently to themselves

The problem is that often Witnesses won’t really be reading the passage.

They’ll just scan it while they line up their own arguments and proof texts instead.

The only way to make sure they confront the text is to have someone read it out loud.

Alternative #3: You read the Scripture aloud from your Bible.

You can do that sometimes, of course, but the risk is that the Witnesses will only half listen while they look for an opening to launch into a prepared Watchtower presentation.

Most likely, they won’t even be aware that they are doing this.

In addition, if your Bible version reads differently than the Watchtower’s New World Translation, Witnesses will trust their own version and assume that any difficulties are caused by an inferior wording in the version you are using.

Benefits to having the Witnesses read the text aloud

There are several benefits to having the Witnesses do the reading aloud from their own Bibles:

The late Walter Martin, author of Kingdom of the Cults, used to say, “Jehovah’s Witnesses don’t listen very well, but they read just fine. Get their noses into the text.”

What if they ask you to read the passage aloud out of your Bible?

Sometimes Witnesses will ask you to read a passage out of your Bible because they believe your translation will support the point they are making. If it’s an important passage that you want them to read aloud from their Bible, go ahead and read it out of your version and then ask, “How does the New World Translation render that?”

What if the Watchtower’s Bible mistranslates the passage?

If the Watchtower’s translation contains a faulty rendering, wouldn’t it be better to read the text out of the recognized translation you are using?

There is a time when you will need to get into translation differences, but in the event of a conflict between versions, Jehovah’s Witnesses will always trust the Watchtower’s rendering over yours.

Because of that, if the New World Translation mistranslates a passage, that’s something you’ll need to know and deal with regardless of who initially reads out the text.

In fact, if you’re going to be effective in getting through to Jehovah’s Witnesses, you need to be aware of these translation issues before you enter the discussion.

In some cases (such as John 1:1), the translation conflicts are so significant that it’s often best to bypass those texts altogether.

In my book, Getting Through to Jehovah’s Witnesses: Approaching Bible Discussion in Unexpected Ways, I alert you to specific translation issues and I give you advice on how to deal with them.

Excellent advice. You have already discussed the context is imperative as well. I am astounded at how when I was a JW I never read the context. It is true JWs are NOT listening if YOU read because they are thinking of their next convincing tactics. So if THEY read, as you made clear, the scriptures speak for themselves. But Jesus sheep know the voice of the shepherd and will respond by turning to him. Gods Word is very powerful and is not to be underestimated. We should pray for JWs to wake up to real salvation.

Thanks for this advice (and insight). I can’t wait for my next opportunity to try this!

Getting the JW to read the text also forces them to acknowledge WHAT they read. That really messes with WT doctrine and ‘logic’ .

One passage I want to ask them about is Hebrews 1:8, their reading: “But about the Son, he says: “God is your throne forever and ever, and the scepter of your Kingdom is the scepter of uprightness.” ” [copied from their own website.] This passage I think is ludicrous in the NWT because if true it relegates God the Father to the position of being only a throne for Michael to sit on for all eternity. If I remember, Solomon’s throne was made of ivory . So the definition here pertaining to the Watchtower’s “Jehovah” god is not very impressive.
Reply   -   Share

Getting them to think about the ramifications of their pseudo-translation is interesting. The example of Hebrews 1:8 is astounding. It results in them teaching that the one they call Michael the archangel sits on top of the one they call Jehovah, as his throne, forever. Then ask: “why then do you say you worship the chair, but you do not worship the one who sits on it?”! This is a wonderful example of where their pseudo-translation leads, if only they will actually read it. Better is if you can get them to read the English words under the Greek in… Read more »
Reply   -   Share