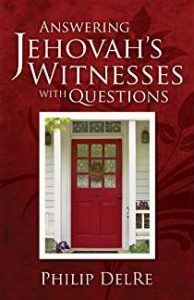 Answering Jehovah’s Witnesses with Questions is a 35-page booklet rather than a full-length book. The author explains why in the Preface (p. 5): “We chose to present this material in booklet form since most people will not read a 300 or 400 page theologically technical book on Jehovah’s Witnesses. So we made this a quick, easy to use resource.”

DelRe’s booklet has the following structure:

Chapter 2: Destroying the Walls of the Watchtower

Chapter 3: The Deity of Christ

Chapter 4: The Truth About the Trinity

Chapter 5: The Law Points Us to Christ

Chapter 6: The Gospel of Grace

Chapter 7: Rescuing a Loved One from the Watchtower

In the Preface, the author states his reason for using questions as a witnessing tool: “What would Jesus do? Jesus would do the same thing He did with the Pharisees. Rather than argue doctrine, Jesus would simply ask the right questions, and what was the result? It shut their mouths every time!” (p. 5)

In Chapter 1, DelRe relates that he had just finished reading Ron Rhodes’ book, Reasoning From the Scriptures with the Jehovah’s Witnesses, when two Witnesses came to his door. Based on the Watchtower’s rendering of John 1:1, they told him Jesus is “a god.”

He asked one of Rhodes’ recommended questions: “Was Jesus a true God, or was he a false god?” (p. 9). Immediately, this put them on the horns of a dilemma. Of course, they couldn’t say Jesus was a false god, but the Watchtower uses John 17:3 to claim that the Father is the only true God. DelRe suggests a number of good follow-up questions you can ask however the Witness decides to answer the original question.

He recommends that you show Witnesses their need to come to Jesus for salvation through the use of the following questions:

I would add to that my personal opinion that you can increase your effectiveness with Witnesses if you frame the questions using Watchtower terminology, such as, “According to Acts 4:12, in Jehovah’s arrangement, to whom must we come for salvation?”

Based on my own experience, I am thoroughly convinced that asking questions is far more effective than making statements so long as the questions are well worded and asked in the right spirit.

Early in the booklet, DelRe states, “Our goal in presenting this material is not to teach you how to win an argument, but how to win a soul.” (p.5).

I would add that it takes prayer and grace in order to have this attitude throughout your interactions with Jehovah’s Witnesses. Often, they came across as smug and arrogant because they believe they are “in the truth” and we are in darkness. I confess from my own experience that because of this the temptation is strong to want to hit them with “gotcha” questions in order to enjoy watching them squirm. That might give us a perverse sense of satisfaction for a season, but it is nothing but a sinful hindrance to the working of the Holy Spirit in their lives and ours.

The chapters in Part Two of the booklet, “Discipleship,” are didactic discussions of the deity of Christ, the Trinity, and the plan of salvation. The author provides questions designed to get these points across to Witnesses.

In my opinion, DelRe’s booklet contains some gems in Chapter 4: “The Truth About the Trinity.” Witnesses are always claiming that the concept of three-in-one makes no sense and is contrary to reason. On page 27, DelRe uses common illustrations to refute this notion.

First, he points out that time consists of past, present, and future. He quotes Adrian Rogers’ summation: “One is not the other, all are part of the same, none can exist without the other, and yet each one is distinct.”

He also uses the illustration space. Space consists of height, width, and depth. They are not the same. They are distinct. Yet none can exist without the others.

Granted, these analogies aren’t perfect. With the Trinity, we are dealing with three Persons, not three things. Additionally, some theologians might contend that the illustrations are examples of modalism rather than trinitarianism. The truth is that God is unique, so all analogies fall short in some respects, but these easy-to-understand comparisons should at least put to rest the Watchtower contention that the concept of three-in-one is incomprehensible.

Sometimes in order to be effective, you have to back up your questions with physical evidence. The booklet doesn’t discuss this. For example, in Chapter 2, “Destroying the Walls of the Watchtower,” the author recommends a series of questions which quote the Watchtower’s false prophecies about 1914, 1925, 1941, and 1975.

There’s nothing wrong with the questions themselves. The problem is that the Witnesses aren’t going to accept your word that the Watchtower made the erroneous predictions you are claiming. Of course, you can give them the references and tell them to look them up, but the odds are great they won’t do it. It’s far more effective if you have the original publications—or at least photocopies—to show them.

If you have them read the prophecies aloud from Watchtower literature you present them, then it’s not you claiming that the Watchtower made such statements. They are seeing the evidence with their own eyes. Likewise, they can’t ignore what’s being said because they are the ones reading out the words.

Of course, in order to make this kind of presentation, the Christian first has to make the effort to obtain the documentation in order to have it available to use.

Do you find DelRe’s question approach helpful? If Jehovah’s Witnesses have argued with you in the past when you made statements with which they disagreed, can you find a way to put them in the form of thought-provoking questions instead?

Captives of a Concept by Don Cameron

If you go to Voice in the Wilderness Ministries website, it’s offered there for $5.

Just checked. They don’t send to the UK.

Sorry, it seems that there are no available shipping methods for your location (United Kingdom). If you require assistance or wish to make alternate arrangements please contact us.