Captives of a Concept by Don Cameron 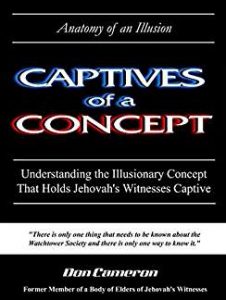 In his 1983 book, Crisis of Conscience, Ray Franz stated his belief that members of Jehovah’s Witnesses’ Governing Body are “captives of a concept.” By that, he meant the concept that the Watchtower organization is a separate entity, “bigger and grander than themselves.” (p. 296) “Perhaps because of this illusory view of ‘the organization,’” Franz said, “a man can be a Member of such a Body that has virtually unrestricted power and authority, and yet not feel a keen sense of personal responsibility for what the Body does, for whatever hurt or whatever misleading and consequent misdirection results.”

Cameron, a former Watchtower elder, picks up on the phrase, but he means something different by it. He focuses, not on the Governing Body, but on the average Jehovah’s Witness.

He says, “The concept that holds Jehovah’s Witnesses captive is their belief that the Watchtower Society is God’s organization.” (p. 11). He adds, “This concept blocks Jehovah’s Witnesses from noticing anything wrong no matter how wrong it is. And in case anyone does think they notice something wrong, they are warned that they must never try to do anything about it, but simply wait for God to do something about it, because, after all, ‘It is his organization…’” (p. 13)

The book contains the following chapters:

Chapter 2: Matthew 24:45-47: The Most Important Scripture in Watchtower Theology

Chapter 4: Matthew 24:47—The Most Important Event in Watchtower History

Chapter 5: The One Mistake All Jehovah’s Witnesses Have Made

Chapter 6: Who Is “God’s Organization”?

Chapter 7: No False Teachings or Prophecies—Why Not?

Chapter 8: Using the Bible to Keep Themselves Captive

Chapter 10: Why Jehovah’s Witnesses Have Unity of Belief

Chapter 12: What They Say is Not What They Always Do

Chapter 13: Who Molds Their Thinking?

Chapter 14: “Slaves of Men or Servants of God?”

Chapter 16: What If This Was Another Religion?

Chapter 17: No Honorable Way Out of the Watchtower Religion

Chapter 19: Their Key to Their Escape

Chapter 20: Evidence Alone Is Not Enough

Chapter 22: When Illusion Meets Up With Reality

The Watchtower claims that Jesus returned invisibly in 1914, examined the teachings and practices of the world’s religions, and that in the spring of 1919 he put the Watchtower organization in charge of his earthly interests, in fulfillment of Matthew 24:45-47. (pages 19, 41)

Cameron uses this very claim as the basis for his approach. He states, “Jehovah’s Witnesses… all failed to examine the Society’s claim to be ‘God’s faithful and discreet slave organization’ based upon what it had been teaching down till 1919 A.D., in fulfillment of Matthew 24:45-47. The reason why there are millions of Jehovah’s Witnesses… is not because they all did make this examination. It is because they didn’t make it.” (page 44)

He states, “It is not necessary to disagree with their interpretation of Matthew 24:45-47. It is necessary to understand it and then hold them to it.” (p. 18) His recommended approach is to ask the Witnesses for a study of Watchtower teachings and practices around the time when Jesus supposedly examined them and to prove by its own standards out of Watchtower literature that its claim is false. (pages 45, 127)

He points out that you don’t have to prove that what the Watchtower taught until “Jesus’ examination in 1919” is false because the organization has abandoned those teachings. That is, if today’s Watchtower doctrines are true (which Witnesses are required to accept), then what it was teaching until 1919 must have been false, meaning that Jesus could not have chosen it to be his “faithful and discreet slave” as they now claim.

Cameron shows you the Watchtower quotations to use.

Despite these limitations, I recommend Captives of a Concept to you. It is an interesting approach, and it’s in accord with former Watchtower elder David Reed’s position that the best approach is to focus on the unreliability of the Watchtower rather than trying to challenge doctrines Witnesses accept as unassailable because they come from “God’s organization.”

What do you think of Cameron’s approach? Have you tried it or something similar? How did it go?