Witnesses of Jehovah by Leonard and Marjorie Chretien 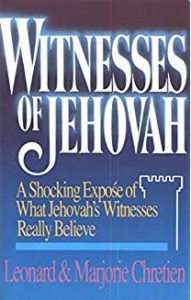 Written by a former Jehovah’s Witness elder and his wife, the stated purpose of Witnesses of Jehovah is “to expose the Watch Tower as a false religion, and not as a persecution or vendetta…. The public is not given full disclosure when invited to study with Jehovah’s Witnesses. People are not told that they must put aside all friends and relatives who do not agree with the Watch Tower Society and that they are joining an organization which can change the rules at any time, with all members having to change without question.” (p. 7)

The book was published in conjunction with the release of the authors’ documentary movie of the same title.

Chapter 1: A History of Disappointments

Chapter 3: Advertise the King and His Kingdom

The book relates the history of the Watchtower organization, giving an overview of its failed predictions of Armageddon and the end of this system of things.

It also relates the authors’ journey out of the Watchtower to salvation in Jesus Christ.

One of the strengths of the book is the personal perspective of the authors based on their 22 years as Jehovah’s Witnesses, during many of which Leonard served as a local elder.

The authors relate how they bought into the Watchtower’s suggestions that 1975 would bring Armageddon. Even after Armageddon failed to arrive, the Chretiens remained faithful. What troubled them greatly, though, was the fact that the Watchtower refused to admit it was wrong and blamed the disappointment on failed expectations of individual Witnesses. The organization showed no concern for the many Witnesses who gave up careers and educational opportunities, sold their homes, postponed needed medical care, and made other sacrifices in order to increase their door-to-door witnessing in anticipation of the end.

Gradually, the authors began to see the Watchtower as an authoritarian organization which punished independent investigation and thinking on the part of Jehovah’s Witnesses.

They saw fellow Witnesses going to prison rather than being drafted into the military. They saw fellow Witnesses dying and letting their children die rather than take life-saving blood transfusions. This happened, not because the individual Witnesses concluded God required it of them, but because “God’s organization” told them that’s what God required of them and required them to obey on penalty of disfellowshipping (excommunication involving shunning by friends and family).

Witnesses of Jehovah doesn’t contain information about the Watchtower that couldn’t be found in other sources, except for the personal stories.

However, what makes the book valuable isn’t the information it reveals so much as the human face it puts on Jehovah’s Witnesses. The reader is reminded that Witnesses are human beings who have doubts and fears and who deserve better than the legalistic religion of the Watchtower. Like the Chretiens, many of them can be reached with the light of the gospel.

In 1986, my wife and I had the privilege of meeting Leonard and Marjorie and of visiting in their home. They were very appreciative of our efforts to get through to Jehovah’s Witnesses. They expressed the hope that many more Christians would try to do so.

I find that book inspires me to keep going when I get discouraged. As the authors state: “Christians have the opportunity to reach out in love to Jehovah’s Witnesses. True, it is necessary to be prepared, so as not to be entangled in their web. But when a Witnesses knocks on our door, we can plant a seed of doubt [about the Watchtower] or perhaps water what someone else has planted.”

Do you find personal testimonies like those of the Chretiens to be an encouragement to continue to reach out to Jehovah’s Witnesses?

Jehovah’s Witnesses Answered Verse by Verse by David A. Reed

Why You Should Believe in the Trinity by Robert M. Bowman, Jr.

1 Comment on "Witnesses of Jehovah by Leonard and Marjorie Chretien"