Why You Should Believe in the Trinity by Robert M. Bowman, Jr. 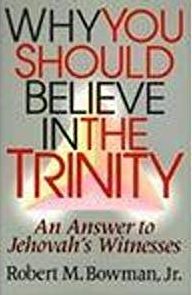 In 1989, the Watchtower published a 32-page brochure entitled, “Should You Believe in the Trinity?” Their answer was no, and they gave their reasons why they believe the Trinity doctrine is false, pagan, and satanic.

Robert Bowman, Jr. wrote this 136-page book, Why You Should Believe in the Trinity, not as an exhaustive treatise but rather as a Christian response to the assertions made in the Watchtower brochure.

He begins by explaining the Trinity doctrine—what it is and isn’t. He explains its practice significance it terms of the value of Christ’s sacrifice. The sacrifice of a God-man is of infinite value in contrast to that of the sacrifice of a created being.

The Watchtower teaches that the Trinity doctrine was forced on the church by Emperor Constantine in the fourth century and quotes various church fathers in support of its claim that the Trinity was not accepted by the early church. To refute this, Bowman provides quotes from a number of ante-Nicene church fathers—Justin Martyr, Irenaeus, Clement of Alexandria, Tertullian, Hippolytus, and Origen. He traces the history of a number of heretical alternatives, including Arianism, the heresy closest to Watchtower theology.

Bowman presents both a positive scriptural case in support of the Trinity and a refutation of many Watchtower anti-Trinitarian proof texts.

Why You Should Believe in the Trinity is structured in the following manner:

Introduction: Before You Reject the Trinity

Chapter 2: The Bible and the Trinity

Chapter 3: The Church and the Trinity

Chapter 4: Will the Real Polytheists Please Stand Up?

Chapter 5: Is Jesus a Creature?

Chapter 6: Does the Bible Deny That Jesus Is God?

Chapter 8: Is the Holy Spirit a Force?

Chapter 9: Trinitarianism in the New Testament

Chapter 10: Worship God as He Has Revealed Himself

What I find most helpful about the book is its collection of quotations from the early church fathers. Although I prefer to focus on the scriptures themselves rather than on external opinions, because the Watchtower claims that those men knew nothing of the Trinity doctrine and didn’t believe its concepts, it was necessary for someone to do the research in refutation. Bowman has done so.

I also find valuable the thoroughness with which the author responds to Watchtower proof texts—both in terms of the number of texts and arguments he addresses and in the depth to which he discusses them.

The book is limited to a single overarching topic—the Trinity. As such, it won’t help you understand or challenge other Watchtower doctrines or practices. In addition, the book doesn’t offer witnessing advice to Christians. That is, it tells us what to convey to Witnesses but not how to convey it.

I don’t mean to imply that the book should be more than it is. The author set out with the purpose of refuting the Watchtower’s anti-Trinity brochure, and he accomplished his purpose. I have found it to be a very valuable resource.

Have you ever had difficulty understanding, explaining, or defending the Trinity doctrine? Do you think Bowman’s book could be of help to you?

Witnesses of Jehovah by Leonard and Marjorie Chretien

How to Rescue Your Loved One From the Watchtower by David A. Reed

1 Comment on "Why You Should Believe in the Trinity by Robert M. Bowman, Jr."