What Is the Real Value of Christ’s Sacrifice? 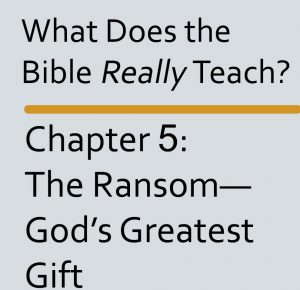 It’s obvious from the title of Chapter 5 of “Bible Teach” that you are supposed to answer that it’s the ransom (or atoning) sacrifice of Jesus Christ.

But that’s not the answer I would give. While not wanting to minimize the importance of Jesus’ atoning sacrifice, I would say that the greatest gift I have received is Jesus Christ himself.

There’s a big difference, isn’t there? The Watchtower’s answer is a work of Christ that took place 2000 years ago. My answer—which I believe is the Christian answer—is a Person who is alive right now and who will live forever.

After all, John 17:3 tells us that knowing the Father and the Son is eternal life, and 1 John 5:11 says that eternal life is “in his Son”—not just paid for by his Son.

You can ask the Witnesses, “If you had to choose, would you rather be with Jesus forever or live forever in paradise conditions on earth without him?”

Sadly, many—if not most—Jehovah’s Witnesses would choose the latter. But wasn’t that Satan’s real accusation against Job—that we humans are primarily interested in whatever blessings we can get God to give us?

Paragraph 6, (p. 49) tells us that “all of us have inherited sin from Adam.” Ask the Witnesses to clarify what this means. Does it just mean that we have inherited the penalty of sickness and death because of Adam’s sin, or does it also include the inner compulsion to sin? The paragraph goes on to say that Adam sold his offspring “into slavery to sin and death.” What does this slavery entail?

The paragraph goes on to say, “There was no hope for Adam or Eve because they willfully chose to disobey God. But what about their offspring, including us?”

Ask the Witnesses to clarify this as well. Don’t you and I willfully choose to disobey God. Does our slavery to sin somehow exonerate us or make us less guilty than Adam?

The value of Christ’s sacrifice

Citing 1 Timothy 2:6, paragraph 9 (p. 50) states that Jesus’ sacrifice was a “corresponding ransom” equal in value to the one perfect life of Adam which was lost.

Matthew 28:20 also explains that the Son of Man came “ to minister and to give his life as a ransom in exchange for many.” So the Jesus’-perfect-life-for-Adam’s-perfect-life view of the atonement is wrong. Jesus died for our sins as well, not just for the sin of Adam.

Another point should be made here. As I pointed out in my discussion of Chapter 4, and in a blog post, “Jesus Isn’t Michael: Contradictory Watchtower Teachings,” the Watchtower’s claim that Jesus had to be an exact counterpart to Adam contradicts its teaching that Jesus is the archangel Michael.

Who really came to save us?

Paragraph 10 (p. 50) says that Jehovah sent one of his perfect spirit sons—his only begotten—to make the ransom sacrifice.

This brings up the question as to whether he could have sent Gabriel or some unnamed angel instead. If Jesus had failed in his mission by sinning (which the Watchtower thinks was possible), would Jehovah have simply kept trying with someone else?

That paragraph also explains that Jehovah transferred the life of this Son into the womb of Mary.

Seek clarification of this. What was transferred? It wasn’t his body. Did Michael have a soul that was his personality or essence? The Watchtower says no. So that didn’t get transferred.

And if no soul or personality was transferred but only an impersonal, animating spirit, then in what sense was Jesus Michael at all?

There’s another important point you can make about the differing views as to Jesus’ identity (created angel vs. God the Son in human flesh). In The Jesus Is the God-Man Approach (p. 161) from my book, Getting Through to Jehovah’s Witnesses: Approaching Bible Discussions in Unexpected Ways, I recommend that you say to the Witnesses:

…I can see how important this issue is to our relationship with  God. If the Watchtower is right, then Jehovah never came to earth but sent someone else to become a man and die for our sins. But if I am right, then God himself, in the person of Jesus Christ, personally came and bore the consequences of his own righteous wrath against sin in order to save us. The Good Shepherd of Psalm 23 himself came to earth and gave his human life for the sheep. That’s a big difference, isn’t it?

Whose sins did Christ pay for?

Ask, “Adam’s sin? What about our sins? Didn’t he pay the price for all of those as well?”

Here you can use The Come to Jesus Approach (pp. 79-81), where I discuss how to show Witnesses that Jesus died for their personal sins as well as for the sins of Adam.

Next week, we’ll discuss the Watchtower’s claim that Jesus died on a “torture stake,” not a cross.

Did Jesus Die on a Cross or on a “Torture Stake”?

1 Comment on "What Is the Real Value of Christ’s Sacrifice?"

Yes you have quotes of WT twisted doctrines but it is even worse than that. WT does not have a clue about what Christ’s work on the cross accomplished. JWs constantly work for salvation , they do not even have the reward of eternal life after Armageddon. For 1000 years they work work work – MAYBE to gain eternal life. They teach Christ does not pay for our sins – we do! They have in their Bible ‘For the wages sin pays is death, but the gift God gives is everlasting life by Christ Jesus our Lord.’ Rom 6:23. WT… Read more »
Reply   -   Share