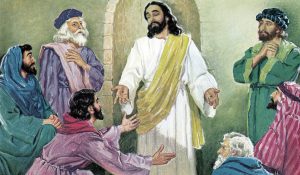 The Watchtower teaches that Jesus’ body never rose from the dead. Rather, “at his resurrection from the dead, Jesus was brought forth with a spirit body.”[1]

Last time, we asked, “What did Jesus say would be raised?” We looked at his prophecy in John 2:19-21 that if his body was destroyed, in three days he would raise it up.

This time, let’s look at what happened after the resurrection and see what Jesus had to say about his resurrected form.

Luke 24:36-39: “While they were speaking of these things, he himself stood in their midst and said to them: ‘May you have peace.’ But because they were terrified and frightened, they imagined that they were seeing a spirit. So he said to them: ‘Why are you troubled, and why have doubts come up in your hearts? See my hands and my feet, that it is I myself; touch me and see, for a spirit does not have flesh and bones just as you see that I have.’” (Watchtower’s New World Translation)

Here is the Watchtower’s response:

Humans cannot see spirits, so the disciples evidently thought they were seeing an apparition or a vision. (Compare Mark 6:49, 50.) Jesus assured them that he was no apparition; they could see his body of flesh and could touch him, feeling the bones; he also ate in their presence. Similarly, in the past, angels had materialized in order to be seen by men; they had eaten, and some had even married and fathered children. (Gen. 6:4; 19:1-3) Following his resurrection, Jesus did not always appear in the same body of flesh (perhaps to reinforce in their minds the fact that he was then a spirit), and so he was not immediately recognized even by his close associates. (John 20:14, 15; 21:4-7) However, by his repeatedly appearing to them in materialized bodies and then saying and doing things that they would identify with the Jesus they knew, he strengthened their faith in the fact that he truly had been resurrected from the dead.[2]

You can challenge this Watchtower explanation by going with them verse-by-verse through the Luke passage and asking some diagnostic questions.

You can sum up with these soundbite questions:

Have you ever brought this passage to the attention of Jehovah’s Witnesses? What was their response? Do you think these soundbite questions would help?