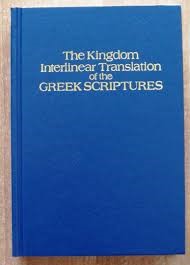 The Kingdom Interlinear Translation of the Greek Scriptures is a Watchtower book that’s available free on its website.

Essentially, it’s the Wescott-Hort interlinear New Testament with the Greek words on the bottom line and the English equivalents above it.

Even if you don’t know Greek, you can sometimes use this resource to give Jehovah’s Witnesses reason to question the Watchtower’s rendering of important texts in its New World Translation.

Here are some examples of how this can be done.

Most Jehovah’s Witnesses are unaware of this.

When you discuss the divine name with Witnesses you can ask them to show you the Tetragrammaton in Greek text set out in the Kingdom Interlinear Translation.

They will search a long time.

At times, the decision to insert “Jehovah” into the text is based on what best supports Watchtower doctrine. For instance, the NIV renders Romans 10:13 as follows: “for, ‘Everyone who calls on the name of the Lord will be saved.’”

Yet the Watchtower replaces “Lord” with “Jehovah” and renders the verse as follows: “For ‘everyone who calls on the name of Jehovah will be saved.’”

If we consult the Kingdom Interlinear Translation to see which rendering is more faithful to the Greek manuscripts, we see that it says this:

Another example involves the Watchtower’s teaching that only 144,000 people will go to Heaven to be with Jesus and that it is from Heaven that they will rule over the earth with him, the key word being “over.”

In support of this dogma, the New World Translation renders Revelation 5:10 as follows: “and you made them to be a kingdom and priests to our God, and they are to rule as kings over the earth.”

Yet the NIV says “on the earth”: “You have made them to be a kingdom and priests to serve our God, and they will reign on the earth.”

Which rendering is correct—will they rule OVER the earth or ON the earth?

We can turn to the Kingdom Interlinear and show Jehovah’s Witnesses that it supports the NIV, not the Watchtower version:

Perhaps the most fruitful use of the Kingdom Interlinear is in showing how the Watchtower has changed the scriptures in such a way as to hide the full deity of Jesus.

The NIV renders this teaching about Jesus as follows:

16 For in him all things were created: things in heaven and on earth, visible and invisible, whether thrones or powers or rulers or authorities; all    things have been created through him and for him. 17 He is before all things, and in him all things hold together.

But the Watchtower adds the word “other” into the passage 4 times in order to make it appear that Jesus was one of the “things” created by God:

Yet the Kingdom Interlinear clearly shows that the word “other” doesn’t belong in the passage at all!

In the NIV, this verse reads: “Simon Peter, a servant and apostle of Jesus Christ, To those who through the righteousness of our God and Savior Jesus Christ have received a faith as precious as ours:”

In other words, Jesus is “our God and Savior.”

But the Watchtower renders the verse differently: “Simon Peter, a slave and an apostle of Jesus Christ, to those who have acquired a faith as precious as ours through the righteousness of our God and the Savior Jesus Christ.”

Here, it appears the verse does not call Jesus “our God and Savior” but rather is talking about two different beings—“our God” and “the Savior Jesus Christ.”

In this case, the Kingdom Interlinear supports the NIV, showing that Jesus is our God as well as our Savior.

You can point out to Jehovah’s Witnesses that the Watchtower followed Granville Sharp’s Rule a few verses later in 2 Peter 1:11, which it rendered: “In fact, in this way you will be richly granted entrance into the everlasting Kingdom of our Lord and Savior Jesus Christ.”

Doesn’t this show a bias based on doctrinal presuppositions which prevented consistent application of Greek grammatical rules?

The point you want to get across to the Witnesses is that instead of letting the text determine doctrine, the Watchtower lets its doctrine determine its rendering of the text.

The Effective Use of Silence