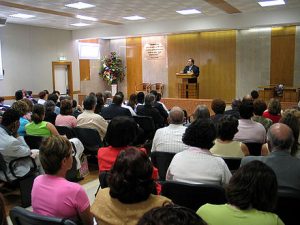 In the Watchtower’s judicial system, when do the elders reprove a person privately and when is the reproof to be public?

If the reproof is public, who is notified and how much are they told?

In a 1976 article entitled “Reproving Persons Who Practice Sin,”[2] the Watchtower set out its interpretation of 1 Timothy 5:20: “Reprove before all onlookers persons who practice sin, that the rest also may have fear.” (Watchtower rendering).

Practicing sin, it said, describes a person who is persisting in some sin. However, the sin may only have committed one time, but if the sinner hasn’t completely determined to avoid a repetition, the elders will view that as persisting in the sin. Their efforts are to be directed—not merely of finding the person guilty of sin—but also at showing him that he is wrong.[3]

The next article in the magazine, “Giving Reproof ‘Before All Onlookers,”[4] the Watchtower stated: “Since we cannot be dogmatic as to just how comprehensive the phrase “before all onlookers” is in its application, it would seem that the need existing should guide in the way it is applied. If reproof needs to be brought to the attention of the whole congregation, then this should be done. If not, then it should be given before all who are concerned in the matter or who are for some reason in need of having the reproof in order to benefit therefrom.”[5] (emphasis original)

Of course, in the Watchtower system, the local elders are the ones who decide what level of publicity is or isn’t needed.

Sometimes, the Watchtower said, public disclosure of the nature of the wrongdoing is a necessary protection for the wrongdoer, ensuring that the congregation won’t speculate that the sin was something far worse.[6]

Citing Matthew 18:15-17 to the effect that disclosure should be no wider than necessary, the Watchtower concluded:

From all the Scriptural evidence it would seem that occasions where sinning needs to be reproved before the entire congregation would be limited to cases of serious wrongdoing that are, or are certain to become, general knowledge, or to cases where more private efforts at bringing about repentance and a turning away from wrongdoing have brought uncertain results and it is felt that a potential danger remains for the congregation, a danger against which they need to be warned in order to protect themselves. Where the wrongdoing is a source of widespread trouble for the congregation, the reproof needs to be ‘with severity’ and persisted in until the wrongs are cleaned out.—Titus 1:13.”[7] The reproof is to be accompanied by bringing relevant Bible passages “forcefully to bear on the kind of sinning involved.[8]

Should the elders disclose the name of the person being reproved? Maybe. Maybe not.

“Since the Scriptures themselves give no indication that naming is involved, it would seem that this too would depend upon the need existing.”[9]

On the other hand, “If they feel that the circumstances demand it they could even name the person (though doing so apart from any talk on the subject), stating that they have reproved him. Where scandal is involved, this would enable the congregation members to defend the congregation against those who might accuse it of condoning wrongdoing. And even where the wrongdoing is not widely known, or has been practiced in a secretive way, the elders might find it necessary to do this” for the protection of the congregation.[10]

Of course, naming the offender might not be necessary for this purpose:

…consider the case where an act of immorality results in a pregnancy out of wedlock or leads to a divorce on grounds of adultery. A talk showing how an individual can become involved in sexual wrongs could include the warning that ‘we should not feel this cannot happen to us, for it has happened in our congregation and we regret to say that it is now producing these unhappy results.’ Though no name was given, either before, during or after the talk, the congregation would know, when seeing the resulting pregnancy or the divorce action, that reproof had indeed been given.[11]

“The judicial committee determines whether the reproof will be announced to the congregation. Reproof should be announced in the following situations:

(1) The sin is widely known or will likely become known in the congregation or community. In such cases, an announcement will safeguard the reputation of the congregation. For example, in a case of adultery, an innocent mate may lean toward forgiveness but is not ready to resume sexual relations at the time that the judicial committee concludes the case. (w16.08 p. 12 par. 15) If the possibility of a Scriptural divorce still exists, an announcement would protect the reputation of the congregation and that of the innocent mate.

The coordinator of the body of elders should approve the announcement before an elder reads it to the congregation at the next midweek meeting. It should read as follows: “[Name of person] has been reproved.” The announcement should be made in only one congregation. Restrictions are not announced.[12]

What “restrictions”? Remember that nearly all involvement at congregational activities is considered a “privilege” (Watchtower “Privileges”) which the elders can either grant or restrict as they exert their control.