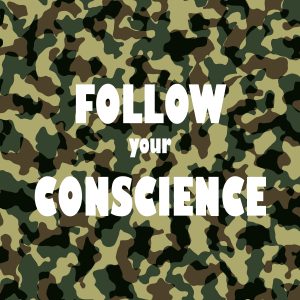 Often, Jehovah’s Witnesses will sound you out on your attitude toward war. Their refusal to participate in anything connected with the military appeals to people’s longings for peace. How should we respond?

The following statement summarizes the Watchtower argument: “If true Christians in one nation were to go to war against another nation, they would be fighting against fellow believers, against people who prayed for help to the same God that they did.” (Reasoning from the Scriptures, p. 272)

If this describes your personal conviction as well, you can simply avoid the issue by telling the Witnesses, “I personally agree with your position on the issue of war and the military.”

Of course, other Christians have totally different personal convictions. Many who have not chosen to enlist in the military would serve if drafted. Still others have enlisted for a time or have even chosen to make the armed forces their career.

If you have no objections to Christians serving in the armed forces, I recommend against trying to persuade Jehovah’s Witnesses to come around to your point of view. In fact, you may want to tell them up front that you are not trying to do so.

Instead, I think you should try to show them that your own position is perfectly defensible from the Scriptures. That is, military service is a matter on which Christians are free to follow the dictates of their individual consciences, not an issue on which all Christians are required to think and act in lockstep.

I recommend that you begin by saying something like this: “Adherents of some other religious organizations also believe it is wrong for Christians to join the armed forces. Because you believe it is wrong to serve in the military, I believe you should have the right to be conscientious objectors. However, I personally don’t think that position is required by the Bible.”

Armies in a fallen world

Point out that in the Old Testament God required male Israelites to serve in the military and directed them to fight in order to take possession of the Promised Land. He didn’t do the fighting for them.

What about the armies of other nations? Have the Witnesses read aloud what God says in Jeremiah 25:8-9 regarding his use of the Babylonian army to discipline Israel: “Therefore this is what Jehovah of armies says, ‘Because you would not obey my words, I am sending for all the families of the north,’ declares Jehovah, ‘sending for King Nebuchadnezzar of Babylon, my servant, and I will bring them against this land and against its inhabitants and against all these surrounding nations. I will devote them to destruction and make them an object of horror and something to whistle at and a perpetual ruin.’” (Watchtower’s 2013 New World Translation, emphasis added)

Your point should be this: Given that we still live in a fallen world, God still has purposes for the armies of this world to fulfill. It will remain so until Christ returns with the armies of heaven.

Whom did God employ to stop Hitler?

The Witnesses are likely to point out that nations today do not obey Jehovah at all but use their armies as instruments of evil or for personal conquest. I suggest that you respond by saying something like this:

“In this fallen system, when nations use violence for evil purposes, what agency does God use to stop them? Let’s look at Hitler as an example. He conquered country after country. He murdered over 6,000,000 Jews and others—including many Jehovah’s Witnesses—in his concentration camps.

So whom did God use as his instruments to stop Hitler’s genocidal rampage?

You can summarize your point by saying, “If your conscience tells you not to take up arms, I certainly respect that decision. But in this fallen world, someone has to serve as police officers and as soldiers in order to restrain evil, and I personally believe that it’s better for righteous men and women to serve in those roles. So I also respect the decisions of Christians who serve in those capacities, and I think you should as well.”

In the next two posts, we will talk about what the New Testament says about military service and how to answer Watchtower proof texts.

Have you ever discussed military service with Jehovah’s Witnesses? How did it go?