Let Jehovah’s Witnesses Be the Teachers 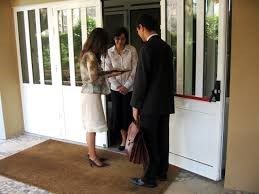 That’s the only way to get them to continue to have ongoing spiritual discussions with you.

You will actually be teaching them things, of course, but indirectly (as a questioning student) rather than directly (as a teacher).

Here’s why Jehovah’s Witnesses insist on being the teachers.

The Watchtower convinces Witnesses of this by arguing that because God is organized, he must have an organization. Next, it stresses that Christians should be united, not divided, and that doesn’t describe the varied churches of Christendom. Jesus said in John 10:16 that his followers would be one flock with one shepherd. “Is it not obvious,” the Watchtower therefore asks, “that they could not be scattered in Christendom’s religions?”[1]

Through constant repetition in its literature and at its meetings, it has convinced them:

Contrary teachings and practices of other religions must be in opposition to the truth and therefore come from Satan. The Watchtower always contrasts itself with what non-Jehovah’s Witnesses consider to be Christianity. It denies that they are genuine Christians at all.

Because Witnesses believe you have been deceived by Satan, they think there’s nothing of spiritual value that you could possibly teach them.

Not only that, but they believe that if they actually allowed you to teach them or even to discuss things with them on equal footing, they would risk being deceived by Satan just like you are.

Consider, too, the fact that Jehovah’s organization alone, in all the earth, is directed by God’s holy spirit or active force… Only this organization functions for Jehovah’s purpose and to his praise. To it alone God’s Sacred Word, the Bible, is not a sealed book… How very much true Christians appreciate associating with the only organization on earth that understands the ‘deep things of God’![2]

… the Bible is an organizational book and belongs to the Christian congregation as an organization, not to individuals, regardless of how sincerely they may believe that they can interpret the Bible. For this reason the Bible cannot be properly understood without Jehovah’s visible organization in mind.[3]

Because Jehovah’s Witnesses base all of their beliefs, their standards for conduct, and organizational procedures on the Bible, their faith in the Bible itself as God’s Word gives them the conviction that what they have is indeed the truth. So their position is not egotistical but demonstrates their confidence that the Bible is the right standard against which to measure one’s religion. They are not self-centered but are eager to share their beliefs with others.[4]

“The global preaching work. Speaking about the last days, Jesus said: “This good news of the Kingdom will be preached in all the inhabited earth…” Yes, all over the earth, Jehovah’s Witnesses from “all nations and tribes” are helping people to understand what the Kingdom is and what it will do for mankind… And they do this free of charge. Although they are hated and persecuted by many, nothing can stop the preaching work, just as Jesus prophesied…[5]

Implications for getting through to Jehovah’s Witnesses

Because of these convictions, you can’t teach Jehovah’s Witnesses anything directly.

Rather, in order to get through to them, you must accept the role of student and plant seeds that will lead them to question their reliance on the Watchtower organization.

However, you must be careful not to come across as antagonistic or as trying to usurp what they see as their rightful role as teachers.

If you do, not only will they break off further contact with you, but they will go away more convinced than ever that they are “in the truth” because you have “persecuted” them.

But should you allow false teachers into your home?

Intent on protecting their flocks from heresies, some well-meaning pastors have even instructed their congregations to turn Jehovah’s Witnesses away rather than sharing the gospel with them. Some of them misapply 2 John 10-11: “If anyone comes to you and does not bring this teaching, do not take him into your house or welcome him. Anyone who welcomes him shares in his wicked work.”

Why do I call this a misapplication? John was not commanding Christians to have no dialogue with people who believe and promote religious error. If we did that, unbelievers would never hear the gospel and Christianity would soon die out!

So what did he mean? In the first century, Christians met in homes rather than in church buildings. New Testament scholar F.F. Bruce states, “The injunction not to receive any one who does not bring ‘the teaching of Christ’ means that no such person must be accepted as a Christian teacher or as one entitled to the fellowship of the church. It does not mean that (say) one of Jehovah’s Witnesses should not be invited into the house for a cup of tea in order to be shown the way of God more perfectly in the sitting-room than would be convenient on the doorstep.”[6]

Remember, when I advise you to let Witnesses be the teachers, I’m not suggesting that you passively submit to the Watchtower indoctrination process or agree with its heretical teachings.

Quite the opposite—you need to be an active, questioning “student” who will get through to them with the real gospel message.

Next time, we’ll talk about how to do that.

How Witnesses Hope Your Meetings Will Go

5 Comments on "Let Jehovah’s Witnesses Be the Teachers"

Yes it is challenging indeed to shine any scriptural light on a JW when they are fully convinced they already have it. JWs are indoctrinated by means of deception and falsehoods. The Bible they use is corrupted and twisted in many ways (the New World Translation). They are captives of a concept. Even if a JW was to humbly agree a Bible teaching is contrary to Watchtower doctrine they could never admit it to another JW. They would be reported as a possible ‘apostate’, brought before a ‘Judicial Commitee’, found guilty and disfellowshipped. JWs live in abject fear of being… Read more »
Reply   -   Share

It’s beyond confusing that JW’s believe themselves to be the ONLY TRUE ‘Christian’ Organization, and yet Jesus is both demoted and, in some cases, shrugged off. After all, if there’s no Hell to be saved from, what DID Jesus die for? To save us from what? If I understand their doctrine (correct me where I’m wrong) Jesus died to allow JW’s the opportunity to work their way to ‘paradise earth’. Not pay for humanity’s sins. They don’t even believe in His resurrection. One of JW’s I had over last year. reacted to my request to study the Gospel of John… Read more »
Reply   -   Share

How many meetings do you have in a week ? It’s impossible to teach someone something you yourself know have less knowledge of. JW’s only teach people who want to learn. JW’s never force anyone to study the Bible and the Bible they use is the very same one everyone uses only difference is how God’s name is written.

Actually, there are a LOT of differences between the NWT and other translations. John 1:1, John 8:58, Romans 6:7, Colossians 1:15-17 come immediately to mind. I’m sure there are many, many others. Also, when you say, “JWs never force anyone to study the Bible,” how could they if they wanted to?