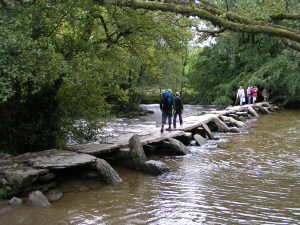 Love isn’t just a witnessing technique. It needs to be a way of life. Part of extending this type of love is building relational bridges.

I’m not suggesting that you pretend to agree with erroneous Watchtower teachings or water down the gospel message. I am saying that you must see and treat Jehovah’s Witnesses as people for whom Christ died, as people whom he loves and to whom he is offering salvation.

Don’t have a spiritual chip on your shoulder. Remember that it is only by the grace and mercy of God that any of us can understand spiritual truth (2 Corinthians 4:4).

1. Begin at your doorstep.

Jehovah’s Witnesses experience a great deal of rejection as they go door-to-door. Most people aren’t interested in their message. Many are openly hostile. A former Jehovah’s Witness elder once told me that over a period of fifty years he had doors slammed in his face, got doused with water, was set on by dogs, and had a gun pointed in his face.

Several well-intentioned people who were trying to witness to him told him directly that he was in a cult, that he was in league with the devil, that he was a false prophet, and that he was going to hell. Do you think any of this hostility won this man to Christ? Of course not. It only served to convince him that he was indeed in the true religion and was being persecuted because of his loyalty to Jehovah.

It is true that Jehovah’s Witnesses come to you with a false gospel and a great deal of misunderstanding of the Bible. It is also true that they believe that they are in the light and that you are in darkness. Love them anyway. Treat them with respect. Be gracious to them. Be patient with them. Remember how Christ treats you.

Even if the Witnesses aren’t impressed with a thing you say, your Christlike attitude can be a powerful witness to the reality of the new birth.

If you greet them in a friendly manner when you open the door, most likely they will use a conversation starter they have learned from the Watchtower. Don’t interrupt them. They will be brief. Smile and thank them for coming. Isn’t that how you would want to be treated if you were witnessing door-to-door?

This may be your only chance to talk with these particular individuals. If they accept your invitation, thank them for coming, offer them something to drink, and invite them to sit down and talk with you. If you do nothing but extend to them this kind of common courtesy, you will have given them a better witness than they get from most Christians.

What if the time is not convenient? They may be carpooling with other Witnesses or nearing the end of the time they have allotted for their field service that day. Your children may be fussing or you may be late for work. Tell them you are interested in hearing what they have to say and set up a time for another visit.

If you are having trouble with scheduling, you can suggest meeting with just one of them. It is rare that a Jehovah’s Witness will agree to meet with you without another Witness present, but I have had it happen. I am always happy with such an arrangement because a Witness is sometimes more open with you if there’s no witnessing partner present to hear what is being said. Be accommodating, but not overeager.

Because you have been friendly, the Witnesses are almost certain to work with you to set up an appointment to come back to meet with you for an extended discussion. Ask for their names and phone numbers so you can notify them in the event that something unexpected comes up. If they don’t want to give out their phone numbers, that’s fine. At least you showed them courtesy.

What if they want to leave a copy of the Watchtower magazine or other material with you in the meantime? Should you accept it? I recommend that you take their literature as long as you won’t be contributing money to their cause. You don’t want to create a barrier needlessly.

If you are concerned about some impressionable person in your household reading it and being misled, you can make sure that doesn’t happen. If nothing else, you can throw away the magazine after the Witnesses leave. Before you do, though, I recommend that at least you make a mental note of the general topics of the articles. That may give you a good clue as to what the approach the Witnesses will take when they return. It may also give you ideas as to what approach might be best for you to take with them.

Some Christians have a conviction against accepting any cult literature even on that basis. If that describes you, the best way to decline so as not to give offense is to say, “Thank you for the offer. I make it a practice not to accept any religious literature from anyone until I first have the chance to talk with them and find out more about their organization and its teachings. I hope you understand.”

3. Continue in your living room.

When you first meet with Jehovah’s Witnesses inside your home, find out as much about them as you can. Invite them to tell you a little bit about themselves. How long has each of them been a Jehovah’s Witness? Are they converts or were they born into the Watchtower religion? Do they enjoy the door-to-door witnessing? How many years have they been doing it? How many hours a month do they average? Are they married? Do they have children? Are all their relatives Jehovah’s Witnesses or are they perhaps the only one in their family? What line of work are they in?

Don’t ask these questions as if you were a police detective. Ask them casually and in a friendly way. Answer similar questions about your own religious background, family, and career. Gathering this type of information should help you relate to them as your meetings progress. If nothing else, obtaining such information will help you to see those Jehovah’s Witnesses as individuals rather than as representatives of an organization. It will also help you pray for them more intelligently.

As your discussions progress, if you sense at any point that you are making headway with one of the Witnesses more than the other, address your comments and questions primarily to the one on whom you are having the impact.

In order to make sure that they aren’t wasting their time, sometimes early in the discussions they will ask if you would be willing to become a Jehovah’s Witnesses if they show you that they alone have the truth. I recommend that you tell them, “Yes, I would, but I have a lot of questions I would need answered before I would reach that point.” You can be sincere in saying that. You know they won’t be able to persuade you that the Watchtower religion is the truth but if they could prove to you that they were right, wouldn’t you join them? That answer also gives them fair notice that if they proceed, there will be a lot of questions you will be expecting them to answer.

4. Point out areas on which you agree.

I am not suggesting that you gloss over the differences. I am saying that it is easier to have a positive impact on people if you are aware of values and beliefs you hold in common. When you do get into areas of disagreement, do so respectfully. Treat them the way you want to be treated.

5. Let them know you care about them.

After you have met with them several times, go out of your way to let them know that you care about them and will consider them your friends even if you never see eye to eye on religious matters.

This should surprise them because it doesn’t match the Watchtower’s us-versus-them and persecution paradigms.

If you have shown them a willingness to be their friend regardless of whether you agree on important religious issues, you may be able to lead them to the true alternative to the Watchtower—Jesus Christ. If not, then at least they will have experienced genuine Christian love.

(Adapted from my upcoming book, Getting Through to Jehovah’s Witnesses)

One aspect of Christian love is being able to show that you respect and value the other person even though you express disagreements over various beliefs. What suggestions do you have for doing this effectively?

Coming up next: Witnessing to Jehovah’s Witnesses in Love: Communicate Effectively

Witnessing to Jehovah’s Witnesses in Love: Prepare Your Mind

4 Comments on "Witnessing to Jehovah’s Witnesses in Love: Build Bridges"

“They believe the Bible is God’s inerrant and inspired Word. So do you.” This might be a tough one, since they’ve constantly changed and modified their Bible. At what level would you say we can agree that their Bible is ‘inerrant’? If it was, whu have thye changed it?

Inerrancy refers to the original writings, not to any particular translation. What a JW can’t do is say, “Oh, well, I think the Bible is wrong about that…” We can certainly challenge the accuracy of the WT’s translation when we need to, as well as ask why the “faithful and discreet slave” has changed the meaning of various Bible passages from one edition of its Bible translation to another.

This is true about inerrancy, but the Watchtower believes that their translation is the most inerrant. I usually ask them about ‘problem passages’ in their own Bible e.g. if the Holy Spirit is God’s Active Force, and considered to be an ‘it’ (not a person), then why does John 16:7, 8, 12 & 13 personalise Him? I try NOT to look for mistakes or flaws, just explanations of their own Bible. Another example might be: Isaiah 44:24; 45:12; 48:113 & Job 9:8. If all these verses make it clear that Jehovah God created all things by Himself and on His… Read more »
Reply   -   Share