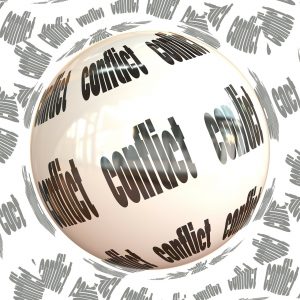 When discussing the Bible with Jehovah’s Witnesses, conflict is inevitable. Key Watchtower teachings are simply not compatible with the doctrines of evangelical Christianity. But we should do what we can to avoid unnecessary conflict.

The Bible doesn’t tell us to avoid all conflict. In fact, Jude 3 instructs Christians “to contend for the faith that was once for all entrusted to the saints.” But this doesn’t mean that we are to be contentious in our manner. We should try to avoid issues that stir up ill will without advancing the message that we are trying to get across. 1 Peter 3:15-16 admonishes us to answer those who question us “with gentleness and respect, keeping a clear conscience, so that those who speak maliciously against your good behavior in Christ may be ashamed of their slander.”

The Watchtower portrays life as a loyalty and endurance test in which the true followers of Jehovah will be persecuted for being in and proclaiming the truth. Insults will only fuel this belief and serve to drive Witnesses deeper into the Watchtower. They will see it as an attack on God and his chosen channel of communication. They will be likely to call off any further meetings. Even if they do return, the hostile atmosphere will poison your attempts to witness to them.

Don’t attack the motives of the Governing Body, Watchtower writers, or elders. In speaking with Jehovah’s Witnesses, it is far better to treat Watchtower overseers (they don’t call them “leaders”) as fallible human beings who are trying their best to understand and obey God than to make comments that assume the worst about their motives.

In fact, because of this expectation of persecution, it is often necessary to go out of your way to make clear that your questions and expressions of disagreement over various doctrines are in no way intended as a personal attack or insult. Be sure to convey to them that you love them and want the best for them because Jesus Christ loves them and died to offer them the free gift of salvation.

Because Jehovah’s Witnesses are so organization minded, make sure they understand that you do not claim that your church or denomination is the only true Christian organization on earth. Emphasize that the key to salvation is a personal relationship with Jesus Christ, not affiliation with the right religious organization.

I recommend against inviting Jehovah’s Witnesses to come to church with you. This may seem strange in light of the principle of building relational bridges. However, remember that Witnesses are indoctrinated in the belief that all the churches of Christendom are satanic and demonized and that by inviting them to church you would be trying to draw them into a false religion opposed to true worship of Jehovah. In addition, if they are converts to the Watchtower religion, they may have had a bad experience with church years ago which contributed to their becoming Jehovah’s Witnesses in the first place. For these reasons, inviting them to church can be a relational barrier rather than a bridge.

Even after a Jehovah’s Witness suspects or concludes that the Watchtower is not really “God’s organization,” attending a Christian church for the first time can be quite a culture shock. I sometimes tell Witnesses who have reached that point in their journey out of the Watchtower, “You are welcome to come to church with me any time, but I wouldn’t want you to violate your conscience or feel pressured in any way.” They often appear relieved and appreciative.

If they should at any point take the initiative of expressing a desire to come to church with you, ask them to let you know what might make them uncomfortable. They might mention such things as a displaying of crosses, passing collection plates, praying to Jesus, and referring to Jesus as God. Don’t argue with them. Let them know that you understand and that you don’t want to do anything that would lead them to violate their conscience.

If they actually do attend a church service with you, let them know that they are free to leave any time if they wish. Sit near the door so they can leave unobtrusively if the experience gets to be too much for them. Whether they leave early or stay through the entire service, talk with them afterwards. Invite them to tell you about anything they found offensive or that made them uneasy.

Don’t offer them anything written by ex-Jehovah’s Witness except in the rare situation where they ask you to do so. Why not? Unless they have already developed serious doubts about the Watchtower, Jehovah’s Witnesses will not read writings of or listen to testimonies of ex-Jehovah’s Witnesses. They consider such people to be traitors to Jehovah, like Judas Iscariot. They can be disfellowshipped (excommunicated) by Watchtower elders if they are caught with such materials.

If you want to confront them with something an ex-Jehovah’s Witness has written, the best way to do it is to tell them that you have read something written by a former Jehovah’s Witness that troubles you and to state that you think it’s only fair to hear the Witnesses’ side of it. Give them the choice as to whether to look at the item or not.

Similarly, because they consider all religious organizations but the Watchtower to be false and satanic, Jehovah’s Witnesses usually will not read any Christian literature. If you offer it to them, they may refuse to take it. Even if they do take it in order to be polite, they probably will throw it away without reading it as soon as they are out of your sight.

In the unlikely event that they ask you to help them find such resources, be willing to help them, but make sure they understand that you are not trying to force anything on them.

(Adapted from my upcoming book, Getting Through to Jehovah’s Witnesses)

Have you ever violated any of these principles in your dealings with Jehovah’s Witnesses? How did it go? If you are a Jehovah’s Witness or ex-Witness, please tell us what you think about this.

4 Comments on "Witnessing to Jehovah’s Witnesses in Love: 3 Important DON’TS"

Excellent points.
Christians have a habit of dragging JWs off to church; a JW is happy to encourage ‘Bible’ studies in our own homes.
Maybe, Christians could take a lead from this?

As Christians, we do need to be able to explain and defend from the Scriptures what it is that we believe.