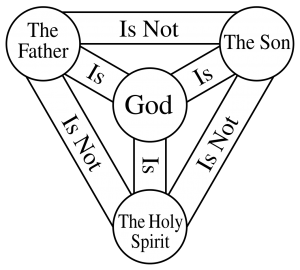 One day a friend who is a former Jehovah’s Witness asked me to explain the Trinity.

We were going to part in about 10 minutes, and I burst out laughing.

My immediate thought was, “How in the world can anyone explain such a complex concept in so short a time?”

Then I gave it my best shot anyway and did a fairly decent job.

Later I realized that it would be wise for Christians to prepare a soundbite explanation of the basics of the Trinity in order to be able to give Witnesses a solid and memorable framework for further discussions.

Jehovah’s Witnesses don’t accept the doctrine of the Trinity. In fact, the Watchtower doctrine can be stated succinctly.

Watchtower Position: Only the Father is God (Jehovah).

An expanded version of the Watchtower teaching can be stated in three statements:

You won’t persuade Witnesses they are wrong with a couple of soundbites. However, let me suggest some brief explanatory statements that may help you get across to them an accurate foundational understanding of what the Trinity is and isn’t.

Here is a soundbite definition of the Trinity: “Within the nature of the one true God, Jehovah, there are three distinct persons—Father, Son, and Holy Spirit. The three persons are the one God.”

Sometimes it helps to break this down into several bite-sized points:

This can be a good starting point because in extended discussions, each of these statements can be defended from the scriptures.

Even the best definition isn’t always adequate to convey a difficult concept. Sometimes a key part of our task is clearing up misconceptions.

Here is how the Watchtower defines the Trinity:

The central doctrine of religions of Christendom. According to the Athanasian Creed, there are three divine Persons (the Father, the Son, the Holy Ghost), each said to be eternal, each said to be almighty, none greater or less than another, each said to be God, and yet together being but one God. Other statements of the dogma emphasize that these three “Persons” are not separate and distinct individuals but are three modes in which the divine essence exists. Thus some Trinitarians emphasize their belief that Jesus Christ is God, or that Jesus and the Holy Ghost are Jehovah.[6]

The problem with the first part of that definition is that Witnesses misunderstand the “none greater or less than another” language. They immediately reject it because of John 14:28, where Jesus said, “The Father is greater than I am.”

If Witnesses give you that definition, you can clarify what you believe as follows:

You can also give this analogy: “You and your boss are both equal as human beings, but at the workplace your boss is positionally greater than you are.”

The “three modes” sentence in the Watchtower’s definition suggests that it’s just a rephrasing of the Trinity doctrine. That’s wrong. You can clear up that misconception as follows: “The idea that the Father, Son, and Holy Spirit are not separate and distinct individuals is called ‘modalism.’ Trinitarians consider this view heretical. Jesus obviously wasn’t praying to himself, for example.”[7]

Sometimes Witnesses will ask me, “So then you believe Jesus is Jehovah?” I used to answer “yes” until I realized that they were misunderstanding my answer because of their own preconceptions. They consider Jehovah to be the Father only and Jesus to be his Son. Consequently, my “yes” answer was as nonsensical to them as if as if I had told them that I believe that Franklin Graham is really his father, Billy.

Here is a soundbite I came up with to clarify what I believe:

If they find that confusing, don’t be surprised. The Trinity is a difficult concept. Just go over your basic definitions with them again until they understand you.Go over these foundational points as many times as you need to before going on to try to defend your Trinitarian belief.

I like to end an introductory discussion of the Trinity on a positive note: “I know you disagree with the Trinitarian concept of God. I realize that I haven’t proved it to you or even attempted to do so. All I have done so far is to clarify what you believe and what I believe so that we understand our basic positions. Only after we understand what we believe can be intelligently discuss why we believe it.”

Have you ever struggled to explain the Trinity to Jehovah’s Witnesses? Do you think some of these soundbites might help get discussions started on a solid footing?

The Trinity Is Not Unfathomable

2 Comments on "Explaining the Trinity"

Yes, this would help. I know from talking to them that there are a ton of misconceptions on the Trinity and other doctrines. This is definitely a step in the right direction. I was shocked when I looked into their publication, “Shound you Believe in the Trinity.” It has so many misquotes and partial quotes. I confronted them about it and they did not even want to talk about it. I told them that I could show them one quote that was wrong and they said they did not care if it was wrong! This was so shocking to me.… Read more »
Reply   -   Share

Do you have my book, Getting Through to Jehovah’s Witnesses? It’s available on Amazon. It hss a lot of approaches you can try.