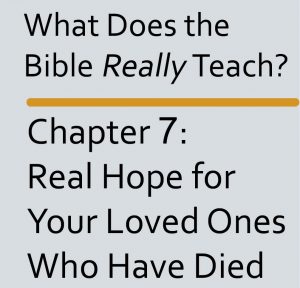 What the Watchtower calls “resurrection” is really a re-creation from God’s memory in which he creates new bodies and implants the person’s personalities into them.

When you think about it, that view is required by the Watchtower’s teaching that the dead no longer exist and that there is no separate soul or spirit to re-enter a body.

You can question this using The Bodily Resurrection Approach from my book, Getting Through to Jehovah’s Witnesses: Approaching Bible Discussions in Unexpected Ways, and its discussion of 1 Corinthians 15:35-37 (p. 112). Those verses show that our mortal bodies are the seed from which the resurrection bodies will come. In other words, the bodies are not identical, but there is continuity, not a complete re-creation.

You can also ask why Jehovah would implant into a resurrected person the same sinful tendencies and personalities they had before they died.

Wouldn’t that make Jehovah the author of evil?

I would ask, “If the dead can’t hear or think, how can they hear Jesus’ voice and rise from the dead?”

Paragraph 16 (p. 72), states, “God’s purpose is that the whole earth be made into a paradise. So the dead will not be raised to life in a world filled with war, crime, and sickness.”

However, as I noted on p. 57 of my book, the Watchtower teaches that people will enter the millennial kingdom with the same sinful tendencies and personalities they had when they died.[i]

I recommend that you ask the Witnesses about this teaching and follow up by inquiring in what sense the millennial kingdom will be a moral paradise. If they say that people will progress to perfection during the thousand years, you can cite them Revelation 20:7-8, which says that at the end of the millennium, Satan will institute a final rebellion in which the number of those who join him will be “as the sand of the sea.” I made this point both in my comments on Chapter 3 of “Bible Teach” and in The New Birth Approach, p. 136.

On page 212 (the appendices don’t have numbered paragraphs), the Watchtower makes the claim that “Sheol, or Hades, is… not a literal place in a specific location. Rather, it is the common grave of dead mankind, the figurative location where most of mankind sleep in death.”

Page 213 says that “Sheol” and “Hades” aren’t places. Rather, they refer to the sort of death from which there will be a resurrection—whether of the righteous or the unrighteous.

This provides you with a springboard to use The Justice for the Wicked Approach, especially its discussion of Hades in Jesus’ account of the rich man and Lazarus (pp. 256-263).

Page 213 says that “Gehenna” is not a literal place either. Rather, it refers to the sort of death from which the person will not be raised.

You can respond, “Wait a minute. Didn’t the chapter just quote Jesus as saying that all those in the memorial tombs will be raised? But now it’s saying that some people will not be resurrected. Isn’t that a contradiction? Please explain.”

They may take you back to the chapter (paragraph 20, p. 73), where the Watchtower asserts that “[Jehovah] will never resurrect those whom he judges to be wicked and unwilling to change.” Of course, that just repeats the contradiction.

Ask the Witnesses, “Doesn’t Acts 24:15 say that there will be a resurrection of the righteous and the unrighteous?”

Jehovah’s Witnesses sometimes cite Luke 12:5 in support of the Watchtower’s contention that some people will never be resurrected. That verse speaks of some people being thrown into Gehenna after they have been killed. Have one of the Witnesses read that verse aloud and ask them to show you anywhere in the Bible which says that these people will not be resurrected before suffering this fate.