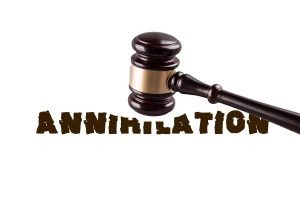 The Watchtower does not believe in everlasting conscious punishment. It states:

“The very idea of eternal torment is repugnant to God. His maximum punishment for the wicked is to revoke the gift of life.”[i]

I recommend that you counter the Watchtower’s annihilation-of-the-wicked doctrine with a soundbite such as this:

If they ask you why you think that, point out that if the ultimate fate of the wicked is annihilation, then an unrepentant petty thief would receive the identical punishment for his sins as Hitler receives for his? Is that justice?

You can follow up by asking the Witnesses to comment on Bible passages that teach different levels of punishment for the wicked.

For example, in Luke 12:47-48, Jesus said: “That servant who knows his master’s will and does not get ready or does not do what his master wants will be beaten with many blows. But the one who does not know and does things deserving punishment will be beaten with few blows. From everyone who has been given much, much will be demanded; and from the one who has been entrusted with much, much more will be asked.”

A good soundbite follow-up question might be: “Don’t these passages teach different levels of punishment of the wicked rather than annihilationism?”

You can also show them Hebrews 10:28-29, which says: “Anyone who rejected the law of Moses died without mercy on the testimony of two or three witnesses. How much more severely do you think a man deserves to be punished who has trampled the Son of God under foot, who has treated as an unholy thing the blood of the covenant that sanctified him, and who has insulted the Spirit of grace?”

To follow up, you can ask, “Doesn’t this passage teach that some people deserve a more severe punishment after death than others?”

If they tell you that the former will be resurrected and have another chance in the millennium kingdom and the latter will not, you can reply as follows: “How could people who rejected the law of Moses and were justly put to death under Jehovah’s law possibly have proved worthy of a resurrection and a second chance?”

Have you ever challenged Jehovah’s Witnesses regarding the justice of the once-size-fits-all punishment of annihilation? Do you think this approach would be helpful?

Dealing with the Watchtower’s 1 Corinthians 15 Arguments