Dealing with the Watchtower’s 1 Corinthians 15 Arguments 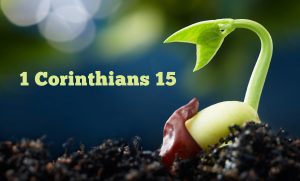 The Watchtower cites 1 Corinthians 15 as “proof” that Jesus could not have been resurrected with a physical body.

1 Cor. 15:40, 42-44, 47-50: There are heavenly bodies, and earthly bodies; but the glory of the heavenly bodies is one sort, and that of the earthly bodies is a different sort. So also is the resurrection of the dead. . . . It is sown a physical body, it is raised up a spiritual body. . . . The first man [Adam] is out of the earth and made of dust; the second man [Jesus Christ] is out of heaven. As the one made of dust is, so those made of dust are also; and as the heavenly one is, so those who are heavenly are also. And just as we have borne the image of the one made of dust, we shall bear also the image of the heavenly one. However, this I say, brothers, that flesh and blood cannot inherit God’s kingdom.” (There is no allowance here for any mixing of the two sorts of bodies or the taking of a fleshly body to heaven.)[1]

You can see how Jehovah’s Witnesses turn this into soundbites:

Let’s see how we can come up with a soundbite response.

First, with regard to the two different types of bodies, have the Witnesses read aloud 1 Corinthians 15:35-37: “But someone may ask, ‘How are the dead raised? With what kind of body will they come?’ How foolish! What you sow does not come to life unless it dies. When you sow, you do not plant the body that will be, but just a seed, perhaps of wheat or of something else.”

Every time the phrase “flesh and blood” appears in the New Testament, it is used as a figure of speech meaning “natural man,” and you can certainly agree that natural, perishable man can’t inherit God’s kingdom.

If they ask you for examples, you can show them the following scriptures:

Your soundbite for them to think about is, “Once our perishable, flesh and blood bodies have been changed by God to be imperishable, they can inherit the kingdom. That’s the main point of 1 Corinthians 15.”

Have Jehovah’s Witnesses ever given you these 1 Corinthians 15 arguments against the bodily resurrection of Christ? Do you find my soundbite responses helpful? Can you suggest improvements?

Dealing with the “Invisible Jesus” Argument