Dealing with the “Locked Room” Argument 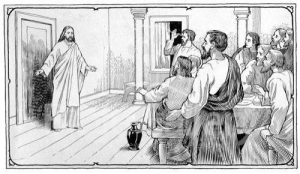 If Jesus rose from the dead in a physical body, how did he suddenly appear in the middle of a locked room?

Let’s see if we can come up with a soundbite answer for this Watchtower question.

The Watchtower expresses its argument as follows:

It is true that Jesus appeared in physical form to his disciples after his resurrection… On one occasion, for the benefit of Thomas, Jesus appeared with the physical evidence of nail prints in his hands and a spear wound in his side. But how was it possible on that occasion for him suddenly to appear in their midst even though the doors were locked? (John 20:26, 27) Jesus evidently materialized bodies on these occasions, as angels had done in the past when appearing to humans.[i]

If the Witnesses present you with this argument against the bodily resurrection of Jesus, I recommend that you draw their attention to the following passage which describes events that took place before Jesus died.

Matthew 14:25-29: “And in the fourth watch of the night he came to them, walking on the sea.  But when the disciples saw him walking on the sea, they were terrified, saying, ‘It is a ghost!’ And they cried out for fear. But immediately he spoke to them, saying, ‘Take heart, it is I; have no fear.’ And Peter answered him, ‘Lord, if it is you, bid me come to you on the water.’  He said, ‘Come.’ So Peter got out of the boat and walked on the water and came to Jesus…”

Have you ever had difficulty answering the Watchtower’s “Locked Room” argument? What do you think of my response?

Dealing with the “Invisible Jesus” Argument

6 Comments on "Dealing with the “Locked Room” Argument"

Check out Acts 8: 39 When they came up out of the water, the Spirit of the Lord suddenly took Philip away, and the eunuch did not see him again, but went on his way rejoicing. 40 Philip, however, appeared at Azotus and traveled about, preaching the gospel in all the towns until he reached Caesarea. Note, how Peter was removed/translated/transported in his physical body. Peter appeared somewhere else, very much as Jesus ‘appeared’ in the upper room. Peter hadn’t been resurrected and this wasn’t a pre-resurrection experience. How does the Watchtower explain this? If this happened to someone as… Read more »
Reply   -   Share

Similar arguments can be made with regard to Jesus’ bodily ascension into heaven. If God can snatch Philip away and if Christ can walk on water and enable Peter to do so, then Jesus can appear in a locked room and ascend to heaven even though he has a physical body. I’ve never seen the Watchtower respond to these points.

Awesome material. Many thanks!

You’re welcome, and thanks for the compliment!

Jesus ascended to a greater reality. Spirit World is more real then material world. lesser reality of the door parted before the supreme reality of Jesus. John 17:25 is when Jesus makes a promise – I will continue to make you known to them, and that is exactly what He is doing in chapter 20 by walking in through a closed door.

sorry I didn’t leave my name