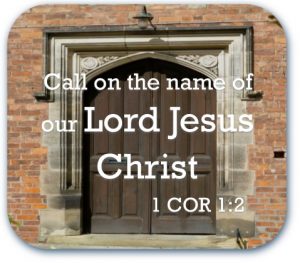 When you talk in terms of coming to Jesus for salvation, Jehovah’s Witnesses are puzzled. Jesus isn’t on earth any more so we can’t get on a plane and go to him.

I have found the biggest barrier to be this:

Jehovah’s Witnesses believe that it would be sinful and idolatrous to pray to Jesus.

The Watchtower teaches them that prayers should only be directed to Jehovah God. Remember that it also teaches that Jesus is not God but the archangel Michael and that it’s wrong to pray to an angel.

The Witnesses with whom you are meeting may take the initiative in telling you that it is wrong to pray to Jesus. If they don’t, you can get them to discuss this barrier by asking them one or more of the following questions:

Show them that Christians in the Bible prayed to Jesus.

You don’t have to get into an argument about the deity of Jesus at this point. Just show them examples in the New Testament where early Christians did pray to Jesus.

Have them read aloud Acts 7:59: “While they were stoning him, Stephen prayed [“made this appeal”—New World Translation], ‘Lord Jesus, receive my spirit.'” The Witnesses may say that he only did this because Jesus was appearing to him in a vision. However, you can point out that this prayer occurred well after the vision ended and after the people had dragged him out of the city to stone him.

Have one of the Witnesses read aloud 1 Corinthians 1:2 and explain to you whose name Paul said Christians were calling on: “… To the church of God in Corinth, to those sanctified in Christ Jesus and called to be holy, together with all those everywhere who call on the name of our Lord Jesus Christ—their Lord and ours…”

If need be, ask them what it means to call on someone’s name in prayer. Doesn’t that mean you are addressing your prayer directly to that person? If necessary, ask:

You might note that some chain reference Bibles link 1 Corinthians 1:2 with Acts 4:12: “Salvation is found in no one else, for there is no other name under heaven given to men by which we must be saved.”

Say something like this: “We are not dishonoring the Father when we call on the name of Jesus. We are obeying him.”

Have one of the Witnesses read aloud Acts 9:20-21, which tells us that immediately after Paul’s conversion, “At once he began to preach in the synagogues that Jesus is the Son of God. All those who heard him were astonished and asked, ‘Isn’t he the man who raised havoc in Jerusalem among those who call on this name? And hasn’t he come here to take them as prisoners to the chief priests?’”

Ask, “According to these verses, whose name were these Christians calling on?”

Have one of the Witnesses read aloud to whom Paul says he prayed concerning his “thorn in the flesh.” 2 Corinthians 12:8-9: “Three times I pleaded with the Lord to take it away from me. But he said to me, “My grace is sufficient for you, for my power is made perfect in weakness.” Therefore I will boast all the more gladly about my weaknesses, so that Christ’s power may rest on me.”

Clearly, Paul was praying to Jesus.

“Jesus told us to pray to Jehovah, not to him.”

Jehovah’s Witnesses will tell you that we are not to pray to Jesus. Rather, we are to pray to Jehovah God in Jesus’ name. They almost always cite Jesus’ instructions in the Lord’s Prayer as proof: “Our Father in the heavens, let your name be sanctified.”

Witnesses will tell you that this means that Jesus was teaching that all prayers should be directed to his Father, Jehovah.”

In reply, point out that Jesus taught that method of prayer to his disciples, people who had already come to him in faith and were therefore able to address God as “Father.” Also, at the time Jesus taught that prayer, he was still on earth. His disciples did not need to pray to him; they could just talk to him face-to-face.

Even though he is now in heaven, 1 Peter 2:4 says that we are still supposed to come to Jesus.

Suggest that they pray to Jehovah and Jesus in the same prayer.

This suggestion was very helpful to the man I mentioned in the last post. He wasn’t comfortable praying to Jesus alone, but he was willing to come to him as long as he was coming to Jehovah at the same time.

Do you see why it’s hard for a Jehovah’s Witness to pray to Jesus? Have you ever asked them to do so? How did they respond? What advice can you give us?