Christ in the End Times 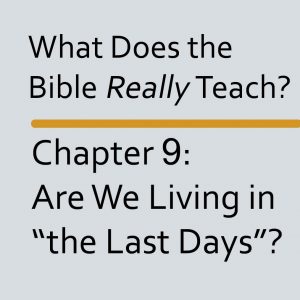 Topic #2: Christ’s “presence” and “the conclusion of this system of things”

Paragraph 2 (p. 86) quotes the Watchtower’s rendering of Matthew 24:3: “What will be the sign of your presence and of the conclusion of the system of things?” Once again, the Watchtower has given you its view that Jesus will not come back to earth but rather will be “present” from heaven. If you believe you have adequately covered this issue with them in your discussion of Chapter 8, let this pass. But if you think it requires further comment, review what I said in those posts.

Paragraph 4 (p. 87) says, “The preceding chapter in this book explained that Jesus Christ became King in heaven in the year 1914. (Read Daniel 7:13, 14). Soon after he received Kingdom power, Jesus took action. ‘War broke out in heaven,’ says the Bible.”

Have them read aloud Daniel 7:13-14. It talks about the Son of Man receiving an everlasting kingdom, but it says nothing from which the year 1914—or any time frame—can be derived. The paragraph also makes it seem as if the Bible says that war broke out in heaven right after Jesus received kingly power in 1914.

Here, you can use material from my book, Getting Through to Jehovah’s Witnesses: Approaching Bible Discussions in Unexpected Ways, to show the Witnesses that the Watchtower has a very poor track record when it comes to coordinating dates with Bible prophecy.

For example, on pp. 285-290 of The False Prophecies Approach, I document this assertion the Watchtower made about the year 1925: “…we may confidently expect that 1925 will mark the return of Abraham, Isaac, Jacob and the faithful prophets of old, particularly those named by the Apostle in Hebrews chapter eleven, to the condition of human perfection” (Source: Millions Now Living Will Never Die! (Brooklyn: Watchtower Bible and Tract Society, 1920), pp. 89-90).

If this penchant for date-setting were presented only as interesting speculation, it might not be a problem. However, the Watchtower has encouraged Jehovah’s Witnesses to make important life decisions based on its “last days” dates:

Reports are heard of brothers selling their homes and property and planning to finish out the rest of their days in this old system in the pioneer service. Certainly this is a fine way to spend the short time remaining before the wicked world’s end.[ii]

Citing Revelation 12:7, 9, 12, paragraph 4 (p. 87) says that war broke out in heaven shortly after Jesus received kingly power in heaven in 1914 and that Satan was cast down to the earth at that time.

This is an example of the Watchtower teaching its chronological speculations as if the Bible authenticated them. The False Prophecies Approach documents its poor track record for setting dates of events that will happen on earth. Why should we believe that its dates are correct regarding things that the Bible says will take place in heaven?

Topic #3: The teaching that Jesus is Michael the archangel

Paragraph 4 (p. 87) says, “Michael [another name for Jesus] and his angels battled with the dragon [Satan the Devil], and the dragon and its angels battled.” Satan and his wicked angels, the demons, lost that war and were cast out of heaven to the earth.”

This is the first time “Bible Teach” tells you that the Watchtower believes Jesus is Michael the archangel, and it does so matter-of-factly by putting in brackets its claim that Michael is “another name for Jesus.” It then refers you to the appendix entitled, “Who Is Michael the Archangel?”

By this point in their study, passive students will simply accept what the Watchtower teaches (See my earlier post entitled, “How Witnesses Hope Your Meetings Will Go”.

You may recall that in my comments on Chapter 4, “Who Is Jesus Christ,” I recommended approaching the issue of Jesus’ identity by unexpectedly bringing up the issue of whether Jesus is Michael the archangel and by using the Jesus Isn’t Michael Approach from my book.

I said that if the Witnesses didn’t agree to discuss that Watchtower teaching at that time, you would be able to raise it in Chapter 9.

This is the opportunity I was referring to. Rather than repeating what I said in my Chapter 4 comments, I’ll simply provide a link here.

If you did use that approach back in Chapter 4, then you need to consider whether and to what extent you might like to get into the subject again now. Repetition can be helpful or it can be beating a dead horse. Rely on the Holy Spirit as to what to do.

Even if you don’t use the full approach here, it may be that there were matters you would like to highlight or points you didn’t get to cover earlier. If so, this is the time to do that.

Next week, we will talk about how to respond to Watchtower proof texts that we are in “the last days.”

Does God Know the Future?

Watchtower (WT) is doing a very good job of waking JWs up – they are leaving by the thousands! How is WT waking JWs up? By their bizarre constantly changing teachings and corporate policies. As an example – the new elders manual directs them NOT to investigate or form a judicial committee if a JW was discovered to be viewing child porn!!! Disgusting! WT is in court all over the world due to the grossly mishandled child sex abuse (CSA) cases. All the governing body members are indicted in a case in New York involving CSA. This case is unusual… Read more »
Reply   -   Share