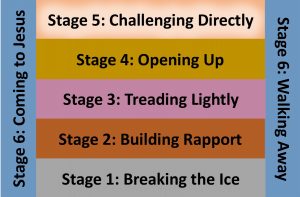 Unless they are harboring secret doubts, the Jehovah’s Witnesses who come to your home believe that the Watchtower Society is God’s visible organization on earth. They believe that it is God’s only channel of communication to man in these last days.

They also believe that the Governing Body of the Watchtower organization are the “faithful and discreet slave” (Matthew 24:45) and that God has put them in charge of his worldwide work.

In order for them to be saved, they must at some point come to rest their faith in Christ himself rather than in an organization that claims to represent him. In other words, their reliance on the Watchtower must be broken.

For this reason, one witnessing strategy is to show them evidence of one or more of the following:

In future posts, I plan to give you specifics regarding these issues. For now, though, I just want to focus on the stage you need to reach in your witnessing relationship in order for this approach to have a favorable outcome.

I’m sure you can see how this approach can backfire quickly. Witnesses have been known to respond with one or more of the following

1. “Where did you get this information? This is false and malicious.”

2. “Why are you listening to opposers of the truth? The Governing Body are just humble servants of Jehovah. They never claimed to be infallible or inspired. Even the apostles had misunderstandings and wrong expectations.”

3. “I can see you aren’t really interested in the truth. You just want to bash Jehovah’s Witnesses. There’s no point meeting with you further.”

In order to avoid such a disaster, Witnesses first need to have enough interaction with you to know your heart, to know that you’re not trying to humiliate them.

You also need to show them a legitimate motivation for investigating these aspects of the Watchtower organization.

What would happen if you presented them all this information and evidence at an early stage of your relationship? You would come across as a person who was lying in wait to launch a verbal assault on the first two Jehovah’s Witnesses who knocked on your door. They would see it as persecution and terminate any further contact with you.

On the other hand, if you had previously gone through weeks of respectful Bible discussions with them and if they had extolled the virtues of the Watchtower organization, it would be quite understandable for you to say at some point, “Before I accept that the Watchtower is God’s organization, I will need to do some research online as to their history. I hope you won’t find that personally offensive. I would do that with any religion that claims to be God’s one true Christian organization.”

If you do present this type of documentation to them, it is best to present it one issue at a time. You can tell them, “I did some research and I found some things that trouble me. I think it’s only fair to give you an opportunity to respond. I want to make sure the information is genuine. I also want to give you a chance to help me work through the things that are bothering me.”

No matter how tactful you are, though, you need to know that the rapport you have with those Jehovah’s Witnesses is strong enough that it will survive the tension it is sure to cause.

Have you tried to show this type of documentation to Jehovah’s Witnesses? How did it go? Was your relationship with the Witnesses good enough or did your efforts backfire? What would you do differently next time?

Coming next: Stage 6 of a Witnessing Relationship: Scenario 1: Coming to Jesus

Stage 4 of a Witnessing Relationship: Opening Up

Stage 6 of a Witnessing Relationship: Scenario 1: Coming to Jesus