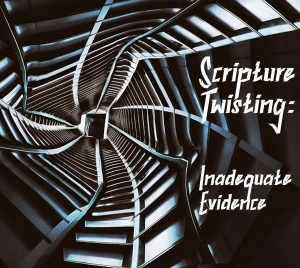 The error of inadequate evidence is defined this way: “A hasty generalization is drawn from too little evidence.” [1]

In his book, Scripture Twisting, James W. Sire gives this example: “[T[he Jehovah’s Witnesses teach that blood transfusion is nonbiblical, but the biblical data which they cite fails either to speak directly to the issue or to adequately substantiate their teaching.”[2]

Let’s look at this example in some detail.

In support of its doctrine, the Watchtower cites the following verses:

First, given that Christians are not under the Mosaic law, why was the directive to “abstain from blood” given to the Gentile church at Antioch in Acts 15? The context shows that it wasn’t because there is anything intrinsically evil in eating animal blood but rather because doing so would have caused unnecessary offense to the Jews: “For the law of Moses has been preached in every city from the earliest times and is read in the synagogues on every Sabbath.” (Acts 15:21, NIV)

That reason might still apply in some situations today, but those instances would be relatively rare.

Second, we need to ask, “What did these passages mean to the original audiences?” The Old Testament prohibition was against eating animal blood. The ability to transfuse human blood didn’t come into existence until thousands of years later, so that procedure wasn’t under discussion. Orthodox Jews who won’t eat animal blood are not offended at all by blood transfusions, so the reason given in Acts 15:21 doesn’t apply.

Third, in interpreting the Bible we should ask whether the Bible’s prohibition applies to something beyond what it meant to its original hearers. Sometimes it can. For example, the commandment not to murder applies to murdering people with guns even though guns didn’t exist in Bible times.

The Watchtower says it is.

The Watchtower makes the following comparison:

Is a transfusion really the same as eating blood? In a hospital, when a patient cannot eat through his mouth, he is fed intravenously. Now, would a person who never put blood into his mouth but who accepted blood by transfusion really be obeying the command to ‘keep abstaining from… blood’? (Acts 15:29) To use a comparison, consider a man who is told by the doctor that he must abstain from alcohol. Would he be obedient if he quit drinking alcohol but had it put directly into his veins?

If Jehovah’s Witnesses give you this argument, you can ask them, “Isn’t there a big difference between drinking blood for nourishment and taking donated blood to replace blood you have lost? Whether you take alcohol or a medication orally or intravenously, it serves exactly the same purpose. But while blood taken by mouth is broken down and used for nourishment just like any other food, blood taken intravenously acts completely differently. It is not food but rather a transport medium, moving oxygen, nutrients, and chemicals and cells to fight infection and heal wounds. That’s just fulfilling blood’s designed purpose, isn’t it?”

The “sanctity of life” argument

The Watchtower also claims, “Out of respect for the sanctity of life, godly people do not accept blood transfusions, even if others insist that such a procedure would be lifesaving.”[3]

If the Witnesses make this argument, ask, “How is the sanctity of life respected by letting a person die for lack of a transfusion? Is the symbol of life more important than life itself?”

The “disrespect for the ransom” argument

The Watchtower has said, “… only sacrificial use of blood has ever been approved by God, and that since the animal sacrifices offered under the Mosaic Law foreshadowed the sacrifice of Christ, disregard for the requirement that Christians ‘abstain from blood’ would be an evidence of gross disrespect for the ransom sacrifice of Jesus Christ. (Lev. 17:11, 12; Heb. 9:11-14, 22)”[4]

If the Witnesses make that argument, ask them to show you in the Scriptures where it says that saving a life by means of a blood transfusion is grossly disrespectful of Christ’s sacrifice. It isn’t there.

In fact, it was Jesus himself who was distraught by the Pharisees’ legalistic view of Bible commandments. In Mark 3:4, he rhetorically asked them, “Which is lawful on the Sabbath: to do good or to do evil, to save life or to kill?”

You might ask, “Given Jesus’ question to the Pharisees concerning breaking the Sabbath, what would his attitude be toward religious authorities who require people to die to uphold the sanctity of life rather than allowing them to have a life-saving blood transfusion?”

In the paragraphs above, I have talked about how to discuss the specific issue of blood transfusions with Jehovah’s Witnesses.

With regard to detecting and avoiding the inadequate evidence error in general, Walter Martin recommends examining doctrinal claims and their proof texts by asking questions such as these: