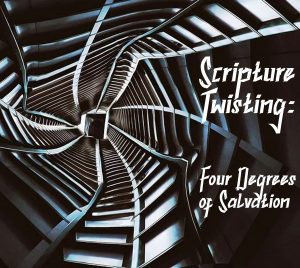 The Watchtower has committed this error many times throughout its history. I will discuss two topics: (1) degrees of salvation and (2) the meaning of Jesus’ story about the rich man and Lazarus (Luke 16:19-31).

I’ll discuss the first one this week and the second one next week.

The Finished Mystery (1917) is probably the strangest book ever published by the Watchtower. Most Jehovah’s Witnesses today are totally unaware of what it contains, and they would probably condemn most of it as nonsense if they didn’t know its source.

Jehovah’s Witnesses would be shocked to learn that the Watchtower used to teach that there are two heavenly classes and two earthly classes. Here is what The Finished Mystery said in its commentary on Revelation 7:9 (pp. 177-178), along with the reasoning behind this teaching:

Instead of teaching that the saved of our race will all be saved to the same thing, the Scriptures show two degrees or kinds of Heavenly salvation, and two degrees or kinds of earthly salvation. In the second chapter of Genesis the stream which went forth from the Garden of Eden was divided into four parts. This is a Scriptural recognition of the fact that from Adam, the original fountain of life, will flow four streams: The Little Flock, who are to sit down with Christ in His Throne; the Great Company, who are to stand before the Throne, having the palms of martyrdom but without the crowns of glory; the Ancient Worthies, the Jewish fathers, Abraham, Isaac, Jacob, Daniel, etc., who are to be made princes in all the earth; and the world of mankind, who will constitute the subjects of the Kingdom over which the Ancient Worthies will rule. The same lesson is taught in the division of the Levites into four camps, each located on a different side of the Tabernacle. (Num. 3:15; F. 128, 129.) It is also taught in the Apostle’s statement in 2 Tim. 2:20, that in God’s great House there will ultimately be found four classes of vessels to His praise.”

The substitution of figurative meaning for literal should be evident here:

The best way to show Jehovah’s Witnesses this error is to give them an example like this, one they will readily see as fanciful.

Then take the next step by asking them what is wrong with the method of Bible interpretation that produced it.

It should soon become evident that by this type of creative “interpretation,” the Bible (or any book) can be made to teach almost anything.

Looking forward to next week WT fallacy of Luke 16, rich man and Lazarus.

Thanks! After it comes out, please let me know what you think of it.