The Watchtower and Free Will 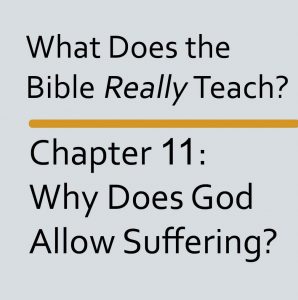 “Bible Teach,” Chapter 11, paragraphs 18-20 (pp. 113-114) asks why God couldn’t have created Adam and Eve in such a way that they couldn’t rebel. The Watchtower’s answer is that God didn’t want us to be robots. He would rather have love than compulsion.

You can respond with points I made in The Righteousness Approach from my book, Getting Through to Jehovah’s Witnesses: Approaching Bible Discussions in Unexpected Ways, pp. 70-71, regarding the Watchtower’s teaching about the coming millennial kingdom.

Ask the Witnesses what will happen to people who live during Christ’s millennial reign but who don’t measure up to Jehovah’s standards of obedience. The Watchtower’s answer is that Jehovah will annihilate them.

Ask them how this is consistent with the chapter’s claim that God wants us to serve willingly rather than under compulsion. Wouldn’t the constant threat of annihilation constitute constant compulsion? This discussion will highlight the fact that salvation as taught by the Watchtower is never secure.

Paragraph 21 (p. 114), presents the Watchtower’s works-oriented salvation system: “You have the opportunity to put the marvelous gift of free will to the best possible use. You can join the millions who have taken a stand on Jehovah’s side. They make God rejoice because they take an active part in proving Satan a liar and a miserable failure as a ruler.”

“The millions who have taken a stand on Jehovah’s side” means Jehovah’s Witnesses. They, supposedly, are the only ones who are taking an active part in proving Satan to be a liar and a failure as a ruler.

To that, I would say first that it’s not clear to me to whom they are proving this. Is Jehovah taking a vote or a poll? Won’t there be few who find the way to eternal life?

Isn’t God—not angels or humans—the final judge? As Romans 3:4 says, “But let God be found true, even if every man be found a liar.”

Second, the Watchtower’s “prove Satan a liar and a failure” teaching highlights its works-salvation system in which life is a continual test of your dedication to Jehovah.

To the contrary, I believe that God wants to show us the depths of our sinfulness and the desperate need we all have for an inner transformation by the Holy Spirit. Without that, our attempts to dedicate ourselves to God fail miserably. Even our “righteousness” is like filthy rags in his sight. (Isaiah 64:6).

As those who inherited a sin nature from Adam, we can’t become righteous through self-effort in trying hard to obey God’s commandments. Galatians 3:11: “Moreover, it is evident that by law no one is declared righteous with God, because ‘the righteous one will live by reason of faith.’”

Rather, God’s law was our schoolmaster to bring us to Christ to be transformed from the inside out. Galatians 3:24: “So the Law became our guardian leading to Christ, so that we might be declared righteous through faith.”

That’s the only thing that will make us righteous enough for God.

If, from your earlier discussion, you believe that the Witnesses still don’t understand the depths of slavery to sin that we inherited from Adam, you can use pp. 66-71 of The Righteousness Approach in my book. Cite them Romans 7:18: “For I know that in me, that is, in my flesh, there dwells nothing good; for I have the desire to do what is fine but not the ability to carry it out.”

Ask them what God’s provision is for ridding us of this sinful nature inside us so that we can truly be free to be righteous.

Your goal will be to get them to see that the Watchtower has no good answer to that question.

Depending on how your discussions have unfolded, you might want to segue into The Faith and Works Approach or The New Birth Approach to show the Witnesses God’s provision.

I want to make clear that as a Christian, I’m not saying that God should have done things differently with regard to dealing with rebellion and suffering.

What I am saying is that the Watchtower’s simplistic explanation and resolution of the problem of suffering and evil isn’t biblical.

The scriptures reveal to us God’s redemptive plan, but they don’t explain exactly why he allows the intensity and duration of sin and suffering in our world. His ways are far beyond our understanding, and he wants us simply to trust him (Job 42).

Next week, we’ll move on to “Bible Teach,” Chapter 12—“Living in a Way that Pleases God.”

Bible Interpretation, The Issue of Sovereignty

The Relationship of Faith and Works

2 Comments on "The Watchtower and Free Will"

I have a friend that is a Jehovah witness and am going to send your articles to her.. please tell me what church you pastored and if you do not want to tell me that just tell me the denomination .. thank you

Will she be open to my articles? A lot of JWs won’t read anything that’s critical of the Watchtower organization or its teachings. To answer your questions, I interim pastored a small Willow Creek Association church for about 6 months in the late 1990s. It’s not really a denomination. I wasn’t ordained by any organization. By profession, I was a trial judge.