The Rich Man and Lazarus: The Watchtower Explanation 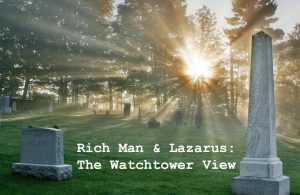 Because of this, the Watchtower does not accept Jesus’ account of the rich man and Lazarus at face value. It rejects completely the Christian view of the passage which we covered in the previous post.

Instead, the Watchtower inserts its own meanings for all the people and events in Jesus’ account and then proclaims itself the defender of reasonableness and biblical consistency. What it ends up with is a fanciful and self-contradictory interpretation of its own creation.

However, Jehovah’s Witnesses believe what the Watchtower tells them. In order to get through to them, you first need to understand what they believe.

According to the Watchtower, virtually everything in this story is symbolic. Ask the Witnesses to go through the entire passage with you and explain to you what everything means. Don’t argue with them. If necessary, ask specific questions to draw out their entire explanation. Here is what the Watchtower teaches (The Greatest Man Who Ever Lived, Chapter 88, 1991):

The “rich man” represents a class—the religious leaders who had been favored with special privileges and opportunities before John the Baptist and Jesus began preaching.

“Lazarus” represents another class—the common people who hungered for spiritual nourishment but received next to nothing from those religious leaders.

The rich man’s “torment” is what the religious leaders are experiencing because of the “fiery judgment messages proclaimed by Jesus’ disciples.”

When the rich man requests that Abraham send Lazarus to “dip his finger in water” and “cool my tongue,” that means that these religious leaders are asking Jehovah to have Jesus’ disciples let up from preaching the fiery messages that are causing them this torment.

The “great chasm” that prevents people crossing from Jesus’ disciples’ side to the religious leaders’ side (and the reverse) is God’s unchangeable, righteous judgment.

When the rich man asks Abraham to send Lazarus to his five brothers, it’s not because he wants his brothers to hear the gospel message and repent. Instead, he is asking Jehovah to have Jesus’ disciples water down their judgment messages so that his religious allies will not also be tormented by them.

Abraham’s response is that if the brothers want to avoid torment, they need to read Moses and the prophets, recognize Jesus as the Messiah, and become his disciples. The religious leaders tell Abraham that “if someone from the dead goes to them, they will repent.” However, they are told that God will not provide special signs or miracles in order to convince them. Instead, they must read and obey the Scriptures.

Here is a link which contrasts in chart form the Christian and Watchtower understandings of Jesus’ rich man and Lazarus teaching.

Now that you understand the Watchtower interpretation, where do you start in trying to get through to Jehovah’s Witnesses? How do you show them that the Watchtower view makes no sense?

In future posts, we’ll look at how to make effective challenges to the Watchtower explanation when talking with Jehovah’s Witnesses.

Have you ever heard the Watchtower explanation of this passage? What questions come to your mind? How would you respond if Witnesses gave you this explanation?

Discussing the Rich Man and Lazarus: Why an “After Death” Story?