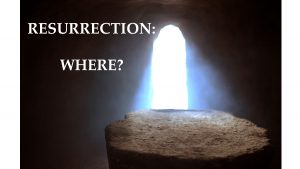 The Watchtower teaches that the resurrection of the dead will be to two separate and distinct locations:

But let’s look at what the Bible says about this.

“1 After this I saw four angels standing at the four corners of the earth, holding back the four winds of the earth to prevent any wind from blowing on the land or on the sea or on any tree. 2 Then I saw another angel coming up from the east, having the seal of the living God. He called out in a loud voice to the four angels who had been given power to harm the land and the sea: 3 “Do not harm the land or the sea or the trees until we put a seal on the foreheads of the servants of our God.” 4 Then I heard the number of those who were sealed: 144,000 from all the tribes of Israel.”

It’s clear that at this point the 144,000 are on earth. Otherwise, there would be no need to withhold judgment on the earth until they are sealed for their protection.

The Watchtower claims that this sealing has been taking place since 1914 and will soon be finished. However, Revelation 7:1 says this sealing takes place after the cataclysmic events described in Revelation 6.

Revelation 7:9 says, “After this I looked and there before me was a great multitude that no one could count, from every nation, tribe, people and language, standing before the throne and in front of the Lamb. They were wearing white robes and were holding palm branches in their hands.”

Revelation 19:1 also speaks about a great crowd in heaven: “After this I heard what sounded like the roar of a great multitude in heaven shouting: ‘Hallelujah! Salvation and glory and power belong to our God…’”

A major source of confusion is the Watchtower’s insistence that those who are resurrected must either be located in heaven forever or on earth forever with no travel back and forth.

“1 Then I saw a new heaven and a new earth, for the first heaven and the first earth had passed away, and there was no longer any sea.  2 I saw the Holy City, the new Jerusalem, coming down out of heaven says God, prepared as a bride beautifully dressed for her husband. 3 And I heard a loud voice from the throne saying, ‘Now the dwelling of God is with men, and he will live with them. They will be his people, and God himself will be with them and be their God.’”

In this passage, God’s heavenly bride comes down out of heaven to a new earth and God himself will dwell with them there.

Since this is so, there won’t be an issue as to which class Christians belong to—a heaven-bound class or an earth-bound class.  At this point, the distinction between heaven (the dwelling place of God) and earth will be abolished.

Have you ever discussed the implications of Revelation 21:1-3 with a Jehovah’s Witness? Do you think this could be a fruitful topic?