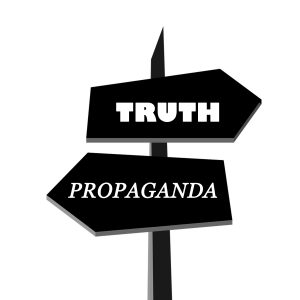 The July 2017 Watchtower article, “Winning the Battle for Your Mind,” warns Jehovah’s Witnesses that Satan is attacking them with propaganda. It defines the term as “the use of biased or misleading information to manipulate the way people think and act.”

It advises that Satan “uses his system of things to discourage Bible reading and study.”

From time to time, there have arisen from among the ranks of Jehovah’s people those who,  like the original Satan, have adopted an independent, faultfinding attitude… They try to sow doubts and to separate unsuspecting ones from the bounteous ‘table’ of spiritual food spread at the Kingdom Halls of Jehovah’s Witnesses, where truly there is ‘nothing lacking.’ (Ps. 23:1-6) They say that it is sufficient to read the Bible exclusively, either alone or in small groups at home. But, strangely, through such ‘Bible reading,’ they have reverted right back to the apostate doctrines that commentaries by Christendom’s clergy were teaching 100 years ago…

In the 2017 article the Watchtower states, “Keep in mind that Satan does not want you to think clearly or reason things out well. Why? Because propaganda “is likely to be most effective,” says one source, “if people . . . are discouraged from thinking critically… So never be content passively or blindly to accept what you hear.”

Sounds good. Yet, as far back as February 1, 1952, the Watchtower has admonished Jehovah’s Witnesses to accept whatever it tells them:

We should meekly go along with the Lord’s theocratic organization and wait for further clarification, rather than balk at the first mention of a thought unpalatable to us and proceed to quibble and mouth our criticisms and opinions as though they were worth more than the slave’s provision of spiritual food. Theocratic ones will appreciate the Lord’s visible organization and not be so foolish as to pit against Jehovah’s channel their own human reasoning and sentiment and personal feelings.

Now some may ask, Should we accept as from the Lord and true the food provided through the discreet slave, or should we withhold acceptance until we have proved it for ourselves?… After being nourished to our present spiritual strength and maturity, do we suddenly become smarter than our former provider and forsake the enlightening guidance of the organization that mothered us?… Are we to be doubtful and suspicious about each new provision? “He who doubts is like a wave of the sea driven by the wind and blown about. In fact, let not that man suppose that he will receive anything from Jehovah. (Jas. 1:6, 7, NW)

The May 15, 1983 Watchtower actually denounced Jehovah’s Witnesses who engage in independent thinking:

As we study the Bible we learn that Jehovah has always guided his servants in an organized way. And just as in the first century there was only one true Christian organization, so today Jehovah is using only one organization. (Ephesians 4:4, 5; Matthew 24:45-47) Yet there are some who point out that the organization has had to make adjustments before, and so they argue: “This shows that we have to make up our own mind on what to believe.” This is independent thinking. Why is it so dangerous?

Such thinking is an evidence of pride. And the Bible says: “Pride is before a crash, and a haughty spirit before stumbling.” (Proverbs 16:18) If we get to thinking that we know better than the organization, we should ask ourselves: “Where did we learn Bible truth in the first place? Would we know the way of the truth if it had not been for guidance from the organization? Really, can we get along without the direction of God’s organization?” No, we cannot.

So what is the final counsel of the 2017 article? Should Jehovah’s Witnesses think for themselves or should they simply believe whatever the Watchtower organization teaches them?

Ironically, this 2017 article which began by saying that “propaganda… is likely to be most effective if people . . . are discouraged from thinking critically… So never be content passively or blindly to accept what you hear” ends up by instructing Jehovah’s Witnesses as follows:

Be determined to stick to Jehovah’s organization and loyally support the leadership he provides—no matter what imperfections may surface… Do not be ‘quickly shaken from your reason’ when faced with what appear to be damaging attacks by apostates or other such deceivers of the mind—however plausible their charges may seem.

If you ask Jehovah’s Witnesses to define “critical thinking skills” and then to tell you some area in which they disagree with Watchtower, how do you think they would respond?