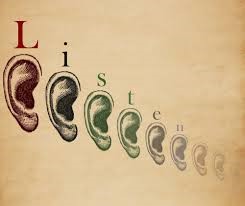 If we are going to get through to Jehovah’s Witnesses, we need to listen so we can find out what is important to them.

Let me illustrate my point by telling you about a bad experience I had one day when I went shopping for a new car.

In order to save everyone time, I told the salesman up front that two things that were of critical importance to me were a good turning radius and plenty of trunk space. If it didn’t have those two features, I wasn’t interested.

Given what I told him, his best approach would have been to focus on those features and show me the top of the line car which had them both.

Instead, each time he showed me a car he launched into his standard sales pitch, which were all about what he wanted to highlight rather than about what I told had told him I considered important. He went on and on about the horsepower, the brakes, the stereo system, the sun roof, and the power train warranty—in short, everything he considered important, but not the turning radius and the trunk space which I had told him I was most interested in.

What’s the application to getting through to Jehovah’s Witnesses with the gospel?

It’s fine to have a strategy in mind when we first start meeting with them, but we need to listen carefully to what they say and how they say it because there may be something that’s critical to the individual Witnesses we are talking with that we need to address first.

For example, my basic plan is usually to start out by talking about God’s plan of salvation.

If you’re familiar with my book, Getting Through to Jehovah’s Witnesses: Approaching Bible Discussions in Unexpected Ways, you may recall that I have five separate approaches for discussing salvation:

Those are analogous to the car salesman’s favorite talking points.

However, it may be that one or both of the Jehovah’s Witnesses you are meeting with will have one or two defining issues that you have to address up front if you are to going to get through to them at all.

Those issues may include topics that you never even considered bringing up first, things like:

The only way can find out is to listen carefully.

What do they choose to bring up?

What topics do they mention more than once?

What subjects do they keep trying to get back to regardless of where you are trying to steer the conversation?

I recall well one Jehovah’s Witness who insisted on lambasting the churches of Christendom for having “a paid clergy class.” That was a minor matter to me, so I tried to steer the discussion to salvation.

But the Holy Spirit warned me to be quiet and listen.

This Witness kept bringing up paid clergy. To him, it was the issue. It was as if I had no credibility with him on any other topic until I first successfully defended from the scriptures the paying of preachers and teachers.

So I set aside my agenda—everything I had planned to talk about—and focused on what was most important to him.

After I had given him a successful biblical refutation of the Watchtower position on that issue, he gained some respect for me and started paying attention to other things I had to say.

The Witnesses you talk to may be willing to talk about your favorite issues. Or they may have a different topic that they need to address first. The only way to find out is to truly listen.

What is NOT YOUR OBJECTIVE

Should You Give Your Personal Testimony?

I totally agree – stick to the issues that matter to them to wake up a JW. Keeping in mind our attitude is kind and respectful and patient. JWs have a persecution complex – they believe because they have ‘the truth’ they will be attacked for their beliefs. However there is very little time left to wake up a JW. We are living in the highest rapture watch of all time. The expectations for the glorification and rapture of the church or body of Christ is this coming Halloween weekend! May it be so! I pray it is true and… Read more »
Reply   -   Share

Thanks for the kind words. Please don’t get caught up in speculation about dates, though. Be ready any time and don’t be discouraged if he doesn’t come when you expect.

Betty, we know that in the Jewish calendar there are three major feasts, Jesus’ death came at one; the Holy Spirit came at the second; and his birth came at the third, when God came down, and temporarily “tabernacled” among us. When He comes again more permanently is not known. Jesus told His followers that even He did not know the time; only the Father knows. So who are we to try to set a time that Jesus Himself did not know. Are we greater than Jesus? But to the issue Dave brought up, I failed there. It seemed when… Read more »
Reply   -   Share