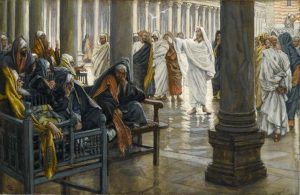 The Watchtower argues as follows:

Jesus declared in prayer to his Father: “I have made your name known… and will make it known.” (John 17:26) Jesus would undoubtedly have pronounced God’s name on numerous occasions when he read, quoted, or explained portions of the Hebrew Scriptures containing that important name. Jesus would thus have used God’s name just as freely as all the prophets did before him. If any Jews were already avoiding the use of God’s name during the time of Jesus’ ministry, Jesus would certainly not have followed their tradition. He strongly criticized the religious leaders when he said to them: “You have made the word of God invalid because of your tradition.—Matthew 15:6.”[1]

Let’s come up with some soundbite responses.

You can begin by asking, “Does making God’s name known mean using the word ‘Jehovah’ or does it mean proclaiming and reverently showing what God is like—the greatness of his person and character?”

You can use a personal illustration by saying, “If you ask me what my father’s name is, and I tell you, ‘His name is [give your father’s name]’, have I told you much of consequence about him? Would I be ‘honoring his name’ by using his name frequently and encouraging other people to do so? Wouldn’t it be far more important for me to tell you what he is like and to exhibit all his good qualities and teachings in my own life? Likewise, it seems to me that this is what Jesus was talking about—extolling and demonstrating the great qualities of his Father. If so, it is God’s character—not the verbalizing of the name ‘Jehovah’—that is important.”

You can respond with this question? “Wouldn’t we expect that if Jesus used the divine name frequently in public, the scribes and Pharisees would have accused him of blasphemy for violating their interpretation of the Third Commandment?”

Follow up with a soundbite such as this: “Can you show me anywhere in the New Testament when the scribes and Pharisees made this accusation?”

If not, doesn’t that indicate that he wasn’t pronouncing the divine name in public?

After all, they accused him of everything else they could think of, including trivial things like allowing his disciples to eat with unwashed hands in violation of their tradition.

Point out that the religious leaders did accuse Jesus of blasphemy but they never accused him of doing so because he uttered the divine name.

You can ask the flip side of that as a second soundbite: “Can you show me any New Testament passage where Jesus rebuked the scribes and Pharisees for failing to call God by the name “Jehovah”?

Point out that he rebuked the religious leaders for many things, but never for failing to speak the divine name. Given that, how important did he consider it to use the divine name?

Have you ever challenged Watchtower teaching regarding Jesus’ use of the name “Jehovah”? Do you find these soundbites helpful?

Must We Pray to Jehovah by Name?

Must We Call God “Jehovah” in Order to Have Intimacy with Him?

2 Comments on "Did Jesus Call God “Jehovah” in Public?"

Yes, i have challenged WT teaching on that, along similar lines/questions that you write about. I find it a very effective line of questioning/reasoning. — If someone today says that someone destroyed their name…are they referring to a specific sequence of letters?

Jesus spoke simple truths … we need not look any further…