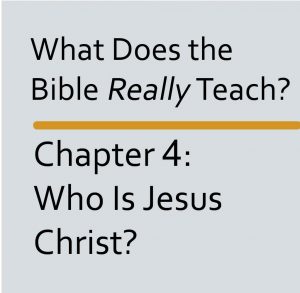 “Bible Teach,” Chapter 4—“Who Is Jesus Christ?” is extremely significant because it deals with the nature, person, and work of Jesus Christ.

It makes four major assertions. We will cover the first 2 in this post.

Assertion #1: It is important to know the truth about Jesus.

I recommend ignoring the heaven versus paradise earth issues at this point on focusing instead on person and work of Jesus.

Paragraph 3 (p. 37) also says, “It is important for you to know the truth about Jesus. Why? Because the Bible says, ‘This means everlasting life, their coming to know you, the only true God, and the one whom you sent, Jesus Christ.’ (John 17:3)”

As I pointed out in commenting on Chapter 1, an earlier edition of the Watchtower Bible and of “Bible Teach” renders that verse differently: “This means everlasting life, their taking in knowledge of you, the only true God, and the one whom you sent forth, Jesus Christ.”

If you didn’t have this discussion when you covered Chapter 1, then regardless of which edition of “Bible Teach” they have given you, ask the Witnesses to explain to you the difference between knowing about someone and actually knowing that person. Ask them how we can actually know Jesus.

Most likely, they have never considered this question. Focusing on this question gives you an opening to move into The Come to Jesus Approach from my book, from my book, Getting Through to Jehovah’s Witnesses: Approaching Bible Discussions in Unexpected Ways, especially its discussion of John 5:39-40 (pp. 76-78), where Jesus says that we must come to him in order to have eternal life.

That temporarily bypasses the issue of Jesus’ identity to focus on the fact that in “Jehovah’s arrangement for salvation,” we don’t get a relationship with Jesus by first coming to the Father. Rather, we first have to come to the Son if we are going to have a relationship with the Father at all.

Assertion #2: Jesus became the Messiah at his baptism

The photo caption at paragraph 8 (online version, paragraph 4, p. 38 of the printed book) states, “At his baptism, Jesus became the Messiah, or Christ.”

Paragraph 7 (p. 40) refers you to the Appendix entitled “How Daniel’s Prophecy Foretells the Messiah’s Arrival” (pp. 197-199), which repeats this assertion.

It claims that the prophecy pointed to the year 29 C.E. “when Jesus was baptized and became the Messiah.” (p. 199). (The appendices don’t have numbered paragraphs.)

I recommend that you ask the Witnesses to read aloud the angel’s announcement at Jesus’ birth at Luke 2:10-11: “Do not be afraid, for look! I am declaring to you good news of a great joy that all the people will have. For today there was born to you in David’s city a savior, who is Christ the Lord.”

Ask them to explain the significance of the fact that the angel said the baby “is”—not, “will become”—Christ the Lord.

You have to be on your guard when you read Watchtower publications or you won’t notice falsehoods they slip in.

Here is an example. Paragraph 8 (p. 40) states, “At the moment when God’s spirit, or active force, was poured out upon him that day, Jesus became the Messiah, or Christ, the one appointed to be Leader and King.”

Notice that the expression “or active force” matter-of-factly and parenthetically conveys the Watchtower doctrine that the Holy Spirit is neither God nor a person but a “force.”

I recommend that you leave discussion of the Holy Spirit until a later chapter in order to avoid getting sidetracked from talking about Jesus, but you could ask the Witnesses to show you where the Bible says that the Spirit was poured out on Jesus at his baptism.

“Bible Teach” doesn’t tell you the Watchtower’s doctrine that Jesus was “born again” to a heavenly hope by the Holy Spirit and became God’s anointed Son at that time.

However, because I know that’s what Jehovah’s Witnesses believe, I recommend saying to the Witnesses, “I don’t believe that any of those accounts says that Jesus received the Holy Spirit or became God’s Son at that time. All they say is that the Holy Spirit and the Father both identified Jesus as God’s Son and as the one who would baptize people with the Holy Spirit.

If the Witnesses do state that Jesus was “born again” at his baptism, that would be a good opportunity to use The New Birth Approach from my book.

Next time, we will examine whether Jesus is God the Son or, as the Watchtower claims, Michael the archangel.

Bible Interpretation, The Nature of Christ

Who Rules the World?

1 Comment on "Did Jesus Become the Messiah at His Baptism?"

Well done David! One of the things that woke me up from the WT fraud was their diminished role of Jesus. They didn’t just put Jesus in the back seat – they put him in the trunk!!!