Crisis of Conscience by Raymond Franz 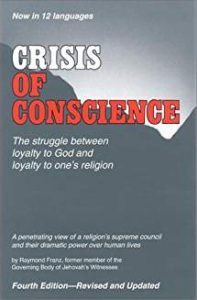 In the early 1980s, rumors started about a huge shake-up at Watchtower headquarters. Long-standing Witnesses were being forced out and disfellowshipped (excommunicated), including Raymond Franz, a member of the Governing Body of Jehovah’s Witnesses and nephew of then Watchtower president Fred Franz.

Shortly thereafter, Ray Franz published Crisis of Conscience, in which he told his story. He discloses how he learned of major changes in doctrine and practice that the organization has tried to cover up or minimize. He also reveals the legalism and hypocrisy that he saw within the organization.

Chapter 2: Credentials and Cause

The Watchtower forbids Jehovah’s Witnesses to read his book and has branded him an apostate and modern-day Judas.

Witnesses have been told that Franz’s book is filled with hate, but any fair-minded person who reads it will be surprised by the author’s lack of hatred and bitterness. The key emotion expressed is sadness at what legalism and a desire for centralized control had done to the religion to which the author had dedicated most of his adult life.

The unique feature of Crisis of Conscience is the inside information that isn’t available from any other source.

The author cites an example of conflicting policies with regard to military involvement of Witnesses in Malawi and Mexico. Strict Watchtower prohibitions led to severe persecution and murder of Witnesses in Africa, while lax requirements in South America led to the opposite result. (pp. 110-135)

Franz also reveals that for a motion to pass, a 2/3 vote of the entire Governing Body membership is required. The purpose is to make sure that decisions have widespread support. However, the unintended consequence is that doctrinal changes and appeals from disfellowshipping actions are denied even through a clear majority of Governing Body members support them. (p. 100)

This is especially significant given the extent to which the Governing Body controls the lives of Jehovah’s Witnesses, issuing directives and rulings on such things as whether Witnesses must go to prison rather than accepting alternative service to being drafted into the military, whether a person should be disfellowshipped and shunned or reinstated, what type of life-saving medical procedures Witnesses are or aren’t allowed to accept, and what type of sexual practices are or aren’t permitted between Witness husbands and wives.

One of the aspects of the Watchtower that troubled Franz the most was that decisions were made, not based on any passage in the Bible, but solely on organizational policy. He came to the conclusion that God never intended for Christians to wield that kind of authority over the lives of fellow believers.

He came to the view that the Governing Body members had become “captives of a concept.” That concept is that the Watchtower organization is a separate entity, “bigger and grander than themselves.” (p. 296) “Perhaps because of this illusory view of ‘the organization,’” Franz says, “a man can be a Member of such a Body that has virtually unrestricted power and authority, and yet not feel a keen sense of personal responsibility for what the Body does, for whatever hurt or whatever misleading and consequent misdirection results.” He adds, “I express the above points, not as a means of condemnation but as a means of explanation, an attempt to understand why certain men that I consider to be honest, basically kind individuals could be party to what I feel that they in their own hearts, would normally have rejected.” (p. 297)

As I read through Crisis of Conscience for the first time, I kept waiting for the part where the author saw the Watchtower as a cult, realized Jesus is God, and embraced the new birth. Unfortunately, it isn’t there. He saw the Watchtower as Christian—legalistic, but Christian. He believed that he was already a believer in Jesus and already born again. Of course, only God knows his heart.

I wrote to him and asked his views on the deity of Christ. He said he believed Jesus is God’s Son and that to go beyond that in any way was to go beyond Scripture. He saw insistence on Jesus being God to be as legalistic as insistence that He is not.

He told me he couldn’t understand ex-Witnesses who said they came to faith in Jesus after they left the Watchtower. He asked, “Who did they think they were they following before?” Ray passed away several years ago now. I don’t know if he ever changed those views.

Despite that disappointment, there’s no doubt that Crisis of Conscience is a unique book because of the author’s experience and perspective. In my opinion, any Christian who wants to minister to Jehovah’s Witnesses should read the book in order to understand the inner workings of the Watchtower organization and the extent to which it controls the minds and actions of Jehovah’s Witnesses worldwide.

Crisis of Conscience is not a book you should quote or recommend to a Witness unless you know that they have substantial doubts about the Watchtower religion. Even if that situation, it’s important to remember all the negative things the Watchtower has said about Ray Franz and his book, things that may scare Witnesses from the book even if they have substantial doubts about the religion.

Have you read Crisis of Conscience? If not, do you agree from my description that the understanding it provides would help you in understanding and getting through to Jehovah’s Witnesses?

Masters of Deception by F.W. Thomas

Jehovah’s Witnesses Answered Verse by Verse by David A. Reed