According to the Watchtower, What Died and Was Raised? 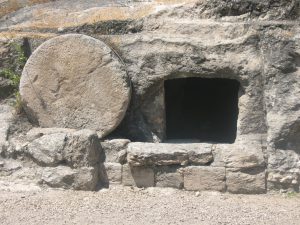 The Watchtower teaches that Jesus was resurrected as a spirit creature.

You can challenge this view of Jesus’ resurrection using soundbites.

The first soundbite is a statement. The second is a question.

The soundbite statement is this: In order for there to be a resurrection, something has to die and then come back to life again.

Jehovah’s Witnesses should agree with that statement. After all, it’s almost the definition of the word “resurrection.”

In fact, the Watchtower states that “the Greek word translated ‘resurrection’ literally means ‘a standing up again’ and it refers to a rising up from death.”[1]

The soundbite question is this: Regarding Jesus’ resurrection, according to the Watchtower, what was it that died and then came to life again?

The “What was it that died…?” part of that question is easy for a Jehovah’s Witness to answer:

The “…and then came back to life again” is what will cause them problems.

That body was sacrificed and never came back to life again. It argues that if Jesus had taken back his fleshly body that would have been the same as taking back the sacrifice and reinstating sin debt that sacrifice had paid for.[2]

It teaches that a person’s spirit isn’t the person himself or his personality. Rather, it is an impersonal, force makes him a living being. “… the ātma is the impersonal life-force, or spirit, which animates the living soul, and which empowers the soul to think, move, and live. When the life-force, or ātma, is extinguished within the living soul, the effect is similar to what happens when electricity is withdrawn from a light bulb. The light is extinguished. Where does the light go? It simply becomes nonexistent.”[3]

What about Jesus’ soul?

The Watchtower teaches that human beings do not have souls. Rather, they are souls. That is, there is no such thing as a soul (the human personality—mind, will, and emotions) which has a separate existence from the body.[4]

Although the Watchtower speaks of the resurrection of dead human souls,[6] that terminology can be challenged with a third soundbite: How can even God raise from the dead something that does not exist?

It states: “Resurrection involves a reactivating of the life pattern of the individual, which life pattern God has retained in his memory. According to God’s will for the individual, the person is restored in either a human or a spirit body and yet retains his personal identity, having the same personality and memories as when he died.”[7]

If Jehovah’s Witnesses give you this convoluted explanation, point out that “life pattern” isn’t a biblical term. According to the Watchtower’s description, this “life pattern” isn’t some part of the individual that dies and then comes back to life again. Rather, it’s God’s recollection of the person’s personality and memories.

In Watchtower teaching, using his own perfect memory, God re-created Jesus’ personality and memories and placed them into a spirit body that had no connection at all with his physical body that died.

In summary, according to the Watchtower, what was the part of Jesus that died and then came back to life again?

You’d have to answer, “Nothing.”

Have you ever brought these points up to Jehovah’s Witnesses? What was their response? If you were a Witness, how would you have responded?