Why Did the Watchtower Cite a Known Spiritualist? 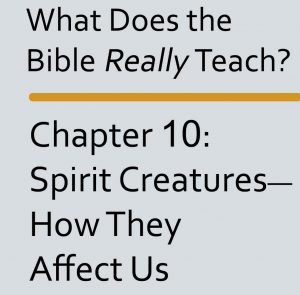 Topic #4: The Watchtower’s citation of a spiritualist author in support of its John 1:1 “a god” translation

Paragraph 10 (p. 100) of Chapter 10 of “Bible Teach” states, “To mislead people, the demons use spiritism. The practice of spiritism is involvement with the demons, both in a direct way and through a human medium. The Bible condemns spiritism and warns us to keep free from everything connected with it.  (Galatians 5:19-21) …wicked spirits use different forms of spiritism to bring all sorts of people under their influence.”

Paragraph 12 (p. 101) goes on to say, “…’anyone who inquires of the dead’ has been misled by wicked spirits and is acting contrary to the will of God… Therefore, be careful to reject this dangerous bait used by the demons.”

Christians will agree with these statements.

However, as I will document from its own website, the Watchtower knowingly cited as an authority a spiritualist who translated John 1:1 the same as it does—“…and the Word was a god.”

Your point here isn’t to argue about the correct rendering of John 1:1. It’s to ask why—when it so strongly condemns spiritism—the Watchtower would knowingly quote a spiritualist in support of its controversial translation of that verse.

Most Jehovah’s Witnesses are totally unaware of that Watchtower history, so if you choose to discuss this, you will have to prove to them that they used such a quote, and that they did so knowing the author’s background.

In 1955, the Watchtower warned its readers against Johannes Greber—a former Catholic priest who engaged in spiritism, saying, “It comes as no surprise that one Johannes Greber, a former Catholic clergyman, has become a spiritualist and has published the book entitled Communication with the Spirit World, Its laws and Its Purpose. (The Watchtower, “What Do the Scriptures Say About ‘Survival After Death’?”, 10/1/55, p. 603)

But then—just seven years later—it cited Greber as an authority who agreed with the Watchtower’s rendering of John 1:1! It said, “Similar is the reading by a former Roman Catholic priest: “In the beginning was the Word, and the Word was with God, and the Word was a god….” A footnote identified the source as follows: The New Testament—A New Translation and Explanation Based on the Oldest Manuscripts, by Johannes Greber (a translation from German into English), edition of 1937, the front cover of this bound translation being stamped with a golden cross.” (The Watchtower, “The Word—Who Is He According to John?”, 9/16/62, p. 554)

When critics called them on this, in 1983 the Watchtower published this comment, acting is if it had only learned in 1980 of Greber’s spiritualism.

Why, in recent years, has The Watchtower not made use of the translation by the former Catholic priest, Johannes Greber?

This translation was used occasionally in support of renderings of Matthew 27, 52, 53 and John 1:1, as given in the New World Translation and other authoritative Bible versions. But as indicated in a foreword to the 1980 edition of The New Testament by Johannes Greber, this translator relied on “God’s Spirit World” to clarify for him how he should translate difficult passages. It is stated: “His wife, a medium of God’s Spiritworld [sic] was often instrumental in conveying the correct answers from God’s Messengers to Pastor Greber.” The Watchtower has deemed it improper to make use of a translation that has such a close rapport with spiritism. (Deuteronomy 18:10-12) The scholarship that forms the basis for the rendering of the above-cited texts in the New World Translation is sound and for this reason does not depend at all on Greber’s translation for authority. Nothing is lost, therefore, by ceasing to use his New Testament.

Obviously, this would be a very confrontational subject, and you would have to decide if this was an appropriate point in your discussions to get into it.

Topic #5: The supposed importance of addressing our prayers to Jehovah by name

Paragraph 17 (p. 104) says, “Since we too live in a world full of demonism, earnestly praying to Jehovah for his protection is essential in resisting wicked spirits. Of course, we need to use Jehovah’s name in our prayers.”

This assertion provides you with an opportunity to use “The Divine Name Approach” from my book, Getting Through to Jehovah’s Witnesses: Approaching Bible Discussions in Unexpected Ways, especially pp. 213-214, where I address this very issue.  You can also look at my post entitled “Must We Pray to Jehovah by Name?”

This statement also provides you an opportunity to defend the propriety of praying to Jesus. I explain how to do this in “The Come to Jesus Approach,” pp. 84-86. I also discussed this in a post entitled “Connect Jehovah’s Witnesses with Jesus: It’s Okay to Pray to Jesus”.

If you deferred an extended discussion of the divine name when the subject was mentioned in Chapter 1 of “Bible Teach,” please go back to my earlier post entitled “The Importance of the Name ‘Jehovah'” and read my additional suggestions.

In a way, it’s surprising that so diverse a range of issues can be raised while studying a seemingly innocuous chapter dealing with angels.

However, as I’ve noted before, the Watchtower often introduces or reinforces doctrines with matter-of-fact assertions in the middle of a teaching on what appears to be an unrelated subject.

Passive students are indoctrinated by such techniques, but—as I said in a post entitled “Student Role Teaching”—as active, questioning students, we can ask questions Witnesses would never think or dare to ask and in that way lead them to consider alternatives to Watchtower dogma.

Next week, we’ll move to Chapter 11 of “Bible Teach”—“Why Does God Allow Suffering?”

The Watchtower and God’s Sovereignty