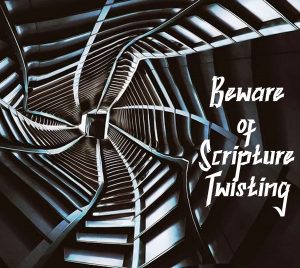 The late Walter Martin, author of The Kingdom of the Cults, once said in a lecture, “There are basic rules of language that God himself observes, so we need to learn what they are and teach and apply them.”

The apostle Peter put it this way, “There are some things in them that are hard to understand, which the ignorant and unstable twist to their own destruction, as they do the other Scriptures. 17 You therefore, beloved, knowing this beforehand, take care that you are not carried away with the error of lawless people and lose your own stability.” (2 Peter 3:16-17)

In his excellent 1980 book, Scripture Twisting, James W. Sire spells out specific ways in which various groups go wrong in the way they understand and teach Bible doctrine.

Most of his categories are applicable to the Watchtower, so I have decided to do a series on this topic, giving my own examples of where the Watchtower goes wrong.

I do this for two reasons.

First, Christians often get frustrated when talking with Jehovah’s Witnesses, knowing that they are wrong but not always being able to articulate the problem.

Second, people with a Witness background who read this blog may be so familiar with Watchtower teachings that it’s hard for them to see where the Watchtower is wrong and to consider alternative interpretations.

In later posts, I’ll go into greater detail and give examples.

In this introductory post, though, I’m just going to list the 20 interpretive errors Sire covers and give his thumbnail explanations of them.

Misreading #1: Inaccurate Quotation: A biblical text is referred to but is either not quoted in the way the text appears in any standard translation or is wrongly attributed.

Misreading #2: Twisted Translation: The biblical text is retranslated, not in accordance with sound Greek scholarship, to fit the preconceived teachings of a cult.

Misreading #3: Biblical Hook: A text of Scripture is quoted primarily as a device to grab the attention of the readers or listeners and then followed by a teaching which is so nonbiblical that it would appear far more dubious to most people had it not been preceded by a reference to Scripture.

Misreading #4: Ignoring the Immediate Context: A text of Scripture is quoted but removed from the surrounding verses which form the immediate framework for its meaning.

Misreading #5: Collapsing Contexts: Two or more verses which have little or nothing to do with each other are put together as if one were a commentary on the other.

Misreading #6: Overspecification: A more detailed or specific conclusion than is legitimate is drawn from a Bible text.

Misreading #7: Word Play: A word or phrase from a biblical translation is examined and interpreted as if the revelation had been given in that language.

Misreading #9: Speculative Readings of Predictive Prophecy: A predictive prophecy is too readily explained by the occurrence of specific events, despite the fact that equally committed biblical scholars consider the interpretation highly dubious.

Misreading #10: Saying But Not Citing: A writer says that the Bible says such and such but does not cite the specific text (which often indicates that there may be no such text at all.)

Misreading #11: Selective Citing: To substantiate a given argument, only a limited number of texts is quoted; the total teaching of Scripture on that subject would lead to a conclusion different from that of the writer.

Misreading #12: Inadequate Evidence: A hasty generalization is drawn from too little evidence.

Misreading #13: Confused Definition : A biblical term is misunderstood in such a way that an essential biblical doctrine is distorted or rejected.

Misreading #14: Ignoring Alternative Explanations: A specific interpretation is given to a biblical text or set of texts which could well be, and often have been, interpreted in quite a different fashion, but these alternatives are not considered.

Misreading #15: The Obvious Fallacy: Words like absolutely, undoubtedly, certainly, all reasonable people hold that and so forth are substituted for logical reasons.

Misreading #16: Virtue by Association: Either (1) a cult writer associates his or her teaching with those of figures accepted as authoritative by traditional Christians; (2) cult writings are likened to the Bible; or (3) cult literature imitates the form of the Bible.

Misreading #17: Esoteric Interpretation: Under the assumption that the Bible contains a hidden, esoteric meaning which is open only to those who are initiated into its secrets, the interpreter declares the significance of biblical passages without given much if any explanation for his or her interpretation.

Misreading #18: Supplementing Biblical Authority: New revelation from postbiblical prophets either replaces or is added to the Bible as authority.

Misreading #19: Rejecting Biblical Authority: Either the Bible as a whole or texts from the Bible are examined and rejected because they do not appear to agree with reason or other revelation.

Misreading #20: World-View Confusion: Scriptural statements, stories, commands or symbols which have a particular meaning or set of meanings when taken within the intellectual and broadly cultural framework of the Bible itself are lifted out of that context, placed within the frame of reference of another system and thus given a meaning that markedly differs from their intended meaning.

In each of the posts, I’ll go beyond describing the interpretive errors and giving examples. I’ll also including a “Combatting This Error” section to offer my suggestions on how to combat these errors when talking with Jehovah’s Witnesses.

The Faith and Works Approach Video

When reading g a couple of these points I couldn’t help but think of what J Vernon McGee correctly said, “All heresy boasts of superior knowledge.”