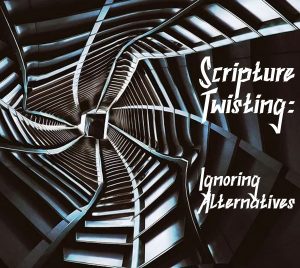 The error of ignoring alternative explanations means that “a specific interpretation is given to a biblical text or set of texts which could well be, and often have been, interpreted in quite a different fashion, but these alternatives are not considered.”[1]

Example #1: The witch at Endor

“In the fortieth year of his reign King Saul faces a battle with the Philistines near Mount Gilboa. Realizing that he is abandoned by Jehovah God, he turns to witchcraft, which he had at the beginning banned from his kingdom. By night he visits a surviving witch at Endor and tries to communicate through her with dead Samuel for information. Saul thus resorts to demonism. A demon impersonates Samuel to the witch of Endor, to her mind’s eye, and transmits through her a message of doom to King Saul. Not “tomorrow,” as the demon incorrectly says, but a number of days later King Saul and three, not all, of his sons fall in battle at Mount Gilboa. King Saul, wounded by a Philistine arrow, hastens his own death by falling on his royal sword.—1 Sam. 28:4-25; 31:1-13.” (Watchtower, 8/15/1964, p. 506)

Example #2: Moses and Elijah on the Mount of Transfiguration

“Were Moses and Elijah actually there in person, as some in Christendom teach? How could they have been there when the Bible tells us that Jesus Christ is ‘the first-born from the dead’? And did not Peter tell the Jews that even God-fearing David had not been raised from the dead but ‘his tomb is among us to this day’? If David was still sleeping in death, so were Moses and Elijah.—Rev. 1:5; Acts 2:29.”

The Watchtower claims that Jesus was not raised from the dead bodily. Yet, in Luke 24:36-43 the risen Lord appeared to his disciples, had them see and touch his execution wounds, and ate a fish. How does the Watchtower explain this?

“Humans cannot see spirits, so the disciples evidently thought they were seeing an apparition or a vision. (Compare Mark 6:49, 50.) Jesus assured them that he was no apparition; they could see his body of flesh and could touch him, feeling the bones; he also ate in their presence. Similarly, in the past, angels had materialized in order to be seen by men; they had eaten, and some had even married and fathered children. (Gen. 6:4; 19:1-3)” (Reasoning from the Scriptures, 1984, p. 334)

The key to discussing Bible topics with Jehovah’s Witnesses is to make clear that: