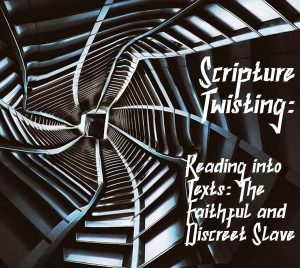 A major source of biblical error is reading more into a passage than God actually put there. Sire calls this “overspecification”, which occurs when “a more detailed or specific conclusion than is legitimate is drawn from a Bible text.”[1] Using this method of interpretation allows one to create new doctrines with little or no actual biblical foundation.   Let’s look at two topics where the Watchtower commits this error: (1) the concept of “the faithful and discreet slave” and (2) who will and won’t be resurrected.

“The faithful and discreet slave”

The concept of “the faithful and discreet slave” is what the Watchtower leaders use to justify the immense control they wield over every aspect of the lives of Jehovah’s Witnesses.

The Watchtower references Matthew 24:45-47. This is all the passage actually states (it is part of a larger passage in which Jesus tells his disciples to be on the watch for his return. He contrasts a faithful servant with an unfaithful one):

Matthew 24:45-47: “Who really is the faithful and discreet slave whom his master appointed over his domestics, to give them their food at the proper time? 46 Happy is that slave if his master on coming finds him doing so! 47 Truly I say to you, he will appoint him over all his belongings.” (NWT)

Yet, the Watchtower organization uses this concept to make sweeping and specific claims about its own reliability and authority:

The timely spiritual food we receive is proof that Jesus, the Head of the congregation, is keeping his promise to feed us. Through whom is he doing so? When giving the sign of his presence, Jesus said that he would use “the faithful and discreet slave” to give “food at the proper time” to his domestics. (Read Matthew 24:45-47.) That faithful slave is the channel through which Jesus is feeding his true followers in this time of the end. It is vital that we recognize the faithful slave. Our spiritual health and our relationship with God depend on this channel.—Matt. 4:4; John 17:3…

The faithful slave must be made up of anointed Christians on earth. Such ones are called “a royal priesthood” and have been commissioned to “ ‘declare abroad the excellencies’ of the one that called [them] out of darkness into his wonderful light.” (1 Pet. 2:9) It is only fitting that members of that “royal priesthood” have a direct share in teaching fellow believers the truth.—Mal. 2:7; Rev. 12:17.

Do all anointed ones on earth make up the faithful slave? No. The reality is that not all anointed ones have a role in dispensing spiritual food to fellow believers worldwide. Among the wheat are anointed brothers who may serve as ministerial servants or elders in their local congregation. They teach from house to house and in their congregation, and they loyally support the direction from headquarters. But they do not have a part in dispensing spiritual food to the worldwide brotherhood. Also among the anointed are humble sisters, who would never try to assume the role of teachers in the congregation.—1 Cor. 11:3; 14:34.

Who, then, is the faithful and discreet slave? In keeping with Jesus’ pattern of feeding many through the hands of a few, that slave is made up of a small group of anointed brothers who are directly involved in preparing and dispensing spiritual food during Christ’s presence. Throughout the last days, the anointed brothers who make up the faithful slave have served together at headquarters. In recent decades, that slave has been closely identified with the Governing Body of Jehovah’s Witnesses. Note, however, that the word “slave” in Jesus’ illustration is singular, indicating that this is a composite slave. The decisions of the Governing Body are thus made collectively. [2]

Here are some of the overspecifications:

The best way I know to show Jehovah’s Witnesses this error is to point it out the way I have done here—by having them read the scripture aloud and contrasting it with everything the Watchtower has convinced them it means.

Ask them where that Scriptures says each of the things the Watchtower is claiming.

The goal is to get them to see that their beliefs come, not from the Scripture itself but from all the embellishment the Watchtower organization has engrafted onto it.