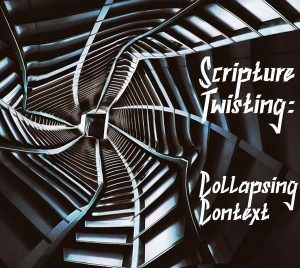 Using a reductio ad absurdum, Walter Martin demonstrated how, by collapsing contexts, we can make the Bible seem to teach anything:

The interpretive error of collapsing contexts is defined as follows: “Two or more verses which have little or nothing to do with each other are put together as if one were a commentary on the other.”[1]

Only by paying careful attention to the context of each passage can we guard against this sort of Scripture twisting.

The Watchtower and the identity of Jesus

Martin also gave a serious example of collapsing contexts by noting how the Watchtower collapses the context of these two unrelated passages in order to make it appear that Jesus is a created being rather than God himself.

Concerning the Watchtower’s juxtaposition of these two passages, Martin notes:

I would add that we should also check to see if the conclusion drawn from combining passages is contrary to revelation expressed elsewhere in the Bible.

In this example, consider what Isaiah 44:24 says about whether God had a created being help him with his creation of the universe: “This is what Jehovah says, your Repurchaser, Who formed you since you were in the womb: ‘I am Jehovah, who made everything. I stretched out the heavens by myself, And I spread out the earth. Who was with me?’” (NWT).

If Jesus created all things, but Jesus is a created being rather than Jehovah God, how can Jehovah say, “I stretched out the heavens by myself”?

The Watchtower and who goes to heaven

The Watchtower also collapses contexts by joining these two passages:

“To how many does the Bible hold out hope of heavenly life?

By asking the “heavenly hope” question and then collapsing the context of the two passages, the Watchtower wants us to draw the conclusion that the “little flock” is the same as the 144,000 and that only they will go to heaven.

The context of Luke 12 is Jesus’ talking to his disciples about seeking God’s kingdom first in their lives. He wasn’t giving a teaching about who will go to heaven and who will not. That subject wasn’t under discussion.

Likewise, there is no indication he was talking about a group of 144,000 who would be sealed for their protection against the judgments on the earth during the great tribulation of the end times, something only mentioned by John many years later (Revelation 7:1-4).

For that matter, isn’t it far more likely that “little flock” was a term of endearment referring to the original disciples to whom Jesus was speaking or even to all Christians (since all of Jesus’ followers in that day constituted a small flock)?

The best way to expose the error of collapsing contexts is carefully to examine the context of each passage:

Excellent post. I can almost hear Walter talking about how jw’s confuse people by taking a text out of its context, diving headlong into another text until you forger what you started to talking about . They tried the Proverbs 8 bit with me but I was one up on ’em. Then, the whole 144,000 bit. HOW they manage to take a text, that is exclusive to Revelation, and tack it to one of the gospels is mind boggling! As always, THANKS for posting these helpful articles.
Reply   -   Share