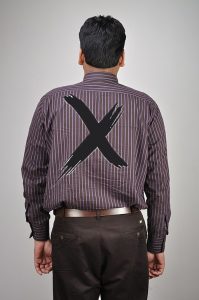 Not believing that the ordinary Christian is supposed to live in response to the promptings of the indwelling Holy Spirit, the Watchtower controls Jehovah’s Witnesses from the top down by means of rules and enforcement systems.

One of the disciplinary methods it employs is known as “marking.”

What is “marking,” and how is it done?

The term “marking” comes from the Watchtower’s rendering of 2 Thessalonians 3:14-15: “But if anyone is not obedient to our word through this letter, keep this one marked and stop associating with him, so that he may become ashamed. And yet do not consider him an enemy, but continue admonishing him as a brother.”

The context Paul was addressing was set out in verses 11-12: “…we hear that some are walking disorderly among you, not working at all, but meddling with what does not concern them. To such people we give the order and exhortation in the Lord Jesus Christ that they should work quietly and eat food they themselves earn.”

Not surprisingly, the Watchtower has formalized this, creating a set of standards and procedures.

“Marking” is a method of discipline in which other Witnesses refuse to socialize with the “marked” Witness because he or she is a bad example. They are to still treat the marked person as a brother or sister and to let them know why they are withdrawing from their company with the goal of getting them to change.[1]

Technically, this is not a discipline imposed by the elders. Rather, it is something to be initiated by individual members of the congregation.[2] It is not supposed to be based on matters of conscience or personal preference. Rather, it should relate only to “a particular habit or course that is clearly contrary to Bible principles.”[3]

The Watchtower has expanded the grounds for this treatment beyond the situation Paul addressed with the Thessalonians: “…the problem may be one of scheming to take material advantage of others, indulging in entertainment that clearly is improper, or getting involved in questionable conduct that does not at this point merit judicial action.”[4]

“Marking” is supposed to be an individual rather than group action: “You should not announce or publicize your private decision, nor try to influence others.” [5] Unfortunately, it doesn’t work that way. A former Jehovah’s Witness told me that when she was on a social outing, a group of Witnesses took her aside and told her not to socialize with a particular Witness in the group because he had been “marked.” She had no idea what he had supposedly done to merit this treatment.

Although “marking” is supposed to be an individual decision, the elders can get involved. Often they give general talks to the congregation, giving warnings about various types of conduct. The Watchtower instructs Witnesses to “avoid the company of the ‘marked’ person, in keeping with the healthful counsel given by the congregation’s elders.”[6]

The elders’ manual formalizes the process in a section entitled “Marking Disorderly Ones,” which states: “At times it may be necessary to mark those who display a ﬂagrant disregard for Jehovah’s standards though not practicing a grave sin that merits judicial action… It may involve on who schemes to take material advantage of others, indulges in entertainment that is clearly improper, dates an unbeliever, or dates when not legally or Scripturally free.”[7]

Notice that this description assumes that the elders should be involved in enforcing an organizational code of conduct regarding proper and improper forms of entertainment, rules against dating a non-Witness, and determining whether divorced Witnesses are or not scripturally free to date again.

Although these regulations are not set out explicitly in the Bible, the Watchtower imposes them. Like the traditions of the Pharisees, organizational rules become elevated to the commands of scripture. It’s a matter of submitting to the authority of “Jehovah’s organization.”

Franz objected: “I did not believe that it was up to us to ‘let’ the brothers do anything. Rather, I believed that God is the One who ‘lets’ them do certain things, either because His Word approves it or because it is silent on the matter… I did not believe that as imperfect, error-prone men we were ever authorized by God to decide what should be allowed or disallowed for others… To paint a foreboding picture of potential unrestrained wrongdoing on the part of the brother simply because we, as a Governing Body, removed some existing regulation, appealed to me as saying that we suspected our brothers of lacking true love of righteousness, of inwardly wanting to sin and being held in check only by organizational restrictions.”[9]

Franz’s vision of the goal of Christian congregations was that “whatever the arrangement, it was to build men and women up so that they would not be spiritual babes, dependent on men or on an institutionalized system, but able to act as full-grown, mature Christians.”[10]

In contrast, the elders’ manual states: “If the disorderly one is moved to change, the elders can individually decide to resume personally socializing with him. This will indicate to the congregation that they consider that the individual is no longer marked.”[11]

Clearly, Franz’s view has not prevailed.