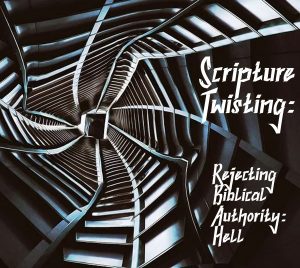 A person or organization commits the error of rejecting biblical authority when, “either the Bible as a whole or texts from the Bible are examined and rejected because they do not appear to agree with reason or other revelation.”[1]

The Watchtower’s rejection of biblical authority is never explicit. The Watchtower will never say directly, “The Bible is wrong about that.” Its teaching is that the Bible is the inspired and infallible Word of God.

But its founder, Charles Taze Russell, set the pattern for the organization by starting with his own reasoning and emotions and then misinterpreting the Bible to teach what he was convinced was true.

The first doctrine of Christendom he rejected was “hellfire.” He wouldn’t send anyone to such a place. How could God?

On page 126, the Watchtower’s 1993 book, Jehovah’s Witnesses—Proclaimers of God’s Kingdom, states, “In harmony with Brother Russell’s strong desire to remove from God’s name the foul stain that resulted from the teaching of a hellfire of eternal torment, he wrote a tract featuring the subject, ‘Do the Scriptures Teach That Eternal Torment Is the Wages of Sin?’ (The Old Theology, 1889)”

Page 174 of its 1984 book, Reasoning from the Scriptures, continues in the same vein:

What would you think of a parent who held his child’s hand over a fire to punish the child for wrongdoing? “God is love.” (1 John 4:8) Would he do what no right-minded human parent would do? Certainly not!

I believe its analogy is based on false assumptions. In Jesus’ account of the rich man and Lazarus (Luke 16:19-31), the rich man is not screaming in pain. Rather, he describes his agony as a deep, never-ending thirst.

But my purpose in this post is not to examine that passage or Watchtower teaching about hell in detail.

Instead, I simply want to list a number of passages the Watchtower has to ignore, mistranslate, or misinterpret in order to maintain its doctrine (quotations are from the NIV, emphasis added):

The best way to show to discuss this error with Jehovah’s Witnesses (on any topic) is to say something like this:

Some people explicitly reject what the Bible says by telling us they don’t believe it. You and I would never do that, but I think there’s a much more subtle way we can reject biblical authority. That is to start with our human reasoning or with our human emotions and then interpreting everything in the Bible to match what we already believe. Unfortunately, with all due respect, I think the Watchtower fallen into this trap. Is it okay if I give you an example?

6 Comments on "The Watchtower Rejects Biblical Authority Regarding Hell"

Got a question. I know you believe JWs are not saved – which has motivated you out of loving concern to do this work. What is a carnal Christian? Is there such a thing as a carnal Christian being saved? And if so would a JW be saved as such? Is it likely a JW can be saved if they believe in Jesus (but they believe the WT Jesus)? There are Christians all over the world some mature some mere babes in spiritual maturity. Where do JWs fall on that scale? Thank you for your work.

I don’t believe JWs are saved. Why? The “Jesus” of the Watchtower is the archangel Michael, and that’s not the biblical Jesus (see John 1:1, 8:24, 2 Corinthians 11:4, etc.). Additionally, they have the wrong gospel. Instead of trusting fully in Christ’s sacrifice, they are relying on their works, and that’s not the gospel Paul preached (see Galatians 1:8). Not understanding or receiving by faith the free gift of Christ’s righteousness through the new birth, they seek to establish their own righteousness through following organizational rules and regulations in order to prove their worthiness to Jehovah (see Romans 10). Their… Read more »
Reply   -   Share

Thank you for your answer. I fear JWs are not saved as well. One more question. There seems to be evidence of a pre-trib rapture. What has your bible study revealed to you? The YT channel ‘RockIslandBooks’ has a vid about the beresheet prophecy explaining Jesus return by 2030 and rapture before the seven year great tribulation which starts approximately 2023. The vid expects Christians to be raptured anytime from now till 2023. Could you watch the vid and give me your thoughts? Thank you. I believe you are truly being used by God – I look forward to the… Read more »
Reply   -   Share

I personally believe in a pre-trib rapture but I may be wrong, so I don’t make that a test of orthodoxy or fellowship. Lots of good arguments can be made from the scriptures supporting other positions. I put no stock in anyone’s dates. Many false teachings have arisen because someone thought they had the dates figured out. Russell and the Watchtower are good examples although by no means the only one. To remind myself of this, I have a book in my library entitled “88 Reasons Why the Rapture Will Occur in 1988.” Guess what? It didn’t. Jesus told us… Read more »
Reply   -   Share

Thank you – I too want to be ready for the rapture, whether it is imminent or until I die of old age, whichever comes first. Thank you for all you do. You are a treasure!