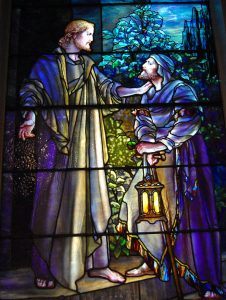 The Watchtower says that the new birth is a designation by Jehovah’s spirit of a person to the heavenly class. Using this definition, it claims that Jesus was born again as are each of the 144,000 who will one day go to heaven. In contrast, those in the great crowd do not need to be born again since they do not have a heavenly calling.

The best way I know to show Jehovah’s Witnesses what the new birth really is about is to focus on John 3 and ask them what Jesus expected Nicodemus to understand when he told him that he needed to be born again.

Have one of the Witnesses read aloud John 3:1-10, the part of Jesus’ conversation with Nicodemus in which Jesus talks about the new birth. Ask, “Where in this passage does Jesus mention the number 144,000 or indicate that he is speaking about a relatively small number of people?” Don’t let them hopscotch to other Bible passages. You are asking specifically about what Jesus wanted Nicodemus to understand.

Ask, “Where in this passage does Jesus say that he is talking about a heavenly hope versus an earthly hope?” Most likely, they will point to Jesus’ reference in verse 5 to entering the kingdom of God.

In response, say, “Nicodemus was a Pharisee. Do you think he would have understood ‘entering the kingdom of God’ to mean going to heaven when he died? Was that his expectation?” They will have to say no, that he would have expected to live on a paradise earth.

Then ask the Witnesses to read aloud Jesus’ question to Nicodemus in John 3:10: “You are Israel’s teacher,’ said Jesus, ‘and do you not understand these things?”

In other words, Jesus expected Nicodemus to understand what he meant when he told him he needed to be born again. But if the Watchtower is right, how could he?

Say something like this: “Let’s assume for the sake of argument that the Watchtower is right and that Jesus was introducing a totally new teaching that a select, anointed group of 144,000 people would receive spirit bodies when they die and go to heaven instead of having their mortal bodies resurrected so they could live forever in paradise on earth.

“If Jesus was introducing a startling new teaching about two classes of believers and two different hopes, why in the world would he be surprised that, as a teacher of Israel, Nicodemus didn’t already understand that? Why would he expect a man raised and educated solely under the Mosaic Law Covenant to know such a thing?”

Most likely they have never considered that question. Ask them if you can tell them what you think Jesus meant and why you think that makes more sense.

If the evangelical Christian understanding is correct, then Jesus was indicating that all human beings need a spiritual rebirth, an inner transformation by the Holy Spirit in order to be saved. Is that something that Jesus would expert Nicodemus, a scholar and teacher of the Hebrew Scriptures, to understand?

Yes, it is. You can say to the Witnesses, “Nicodemus certainly would have known about the repeated moral failings of the nation of Israel, all the times they violated God’s law. Despite being the recipient of divine guidance, deliverance, miracles, laws, and promises, as well as  having the ark of the covenant and the presence of the glory of God dwelling in the tabernacle and later in the temple, the Israelites failed time and again to live up to their covenants with Jehovah. Clearly, something was seriously wrong. A major transformation was needed.”

Scriptures you can cite

Ask, “Wouldn’t Jesus have expected Nicodemus to understand from this passage that human beings had no way of meeting Jehovah’s righteous demands, no way of proving worthy of everlasting life except by allowing God to put them into this new covenant that would give them an inner righteousness that they couldn’t otherwise attain as sinful descendants of Adam?”

Next, ask the Witnesses to read aloud Ezekiel 11:19-20: “I will give them an undivided heart and put a new spirit in them; I will remove from them their heart of stone and give them a heart of flesh. Then they will follow my decrees and be careful to keep my laws. They will be my people, and I will be their God.”

Ask, “Based on this, do you see why I believe that the need for inner transformation by God is what Jesus meant by being born again? He expected Nicodemus to understand that in order to be accepted into Jehovah’s kingdom, people had to have this new birth, a new spirit and a new heart, an inner transformation by God that would finally make them able to live according to his righteous standards. In other words, being born again isn’t about a special group of people going to heaven at all. It’s an inner transformation we all need in order to experience salvation and eternal life.”

Have Jehovah’s Witnesses ever told you the Watchtower’s definition of “born again”? Do you believe my suggestion would be helpful in getting them to question this Watchtower teaching?