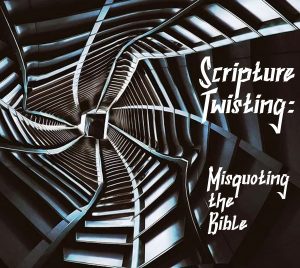 Often, that is not the case at all. The Watchtower frequently misrepresents the Bible through use of inaccurate quotations. In his book, Scripture Twisting,  James Sire defines this error as follows: “A biblical text is referred to but is either not quoted in the way the text appears in any standard translation or is wrongly attributed.”[1]

Here are some examples of how the Watchtower misleads through inaccurate quotation:

Example #1: “If we have love for Jehovah and for the organization of his people we shall not be suspicious, but shall, as the Bible says, ‘believe all things,’ all the things that The Watchtower brings out.” (Qualified To Be Ministers, 1955, p. 156)

Example #3: “Approved association with Jehovah’s Witnesses requires accepting the entire range of the true teachings of the Bible, including those Scriptural beliefs that are unique to Jehovah’s Witnesses. What do such beliefs include?… That the great issue before humankind is the rightfulness of Jehovah’s sovereignty, which is why he has allowed wickedness so long. (Ezekiel 25:17) … That there is a “faithful and discreet slave” upon earth today ‘entrusted with all of Jesus’ earthly interests,’ which slave is associated with the Governing Body of Jehovah’s Witnesses. (Matthew 24:45-47)… (The Watchtower, 4/1/86, p. 31)

Example #4: “They have a modern Governing Body of older Christian men from various parts of the earth who give needed oversight to the worldwide activities of God’s people. these men, like the apostles and older men in Jerusalem in the first century, are anointed members of the faithful and discreet slave class designated by Jesus to care for all of his Kingdom interests here upon earth. History has proved that they can be trusted to follow the direction of the holy spirit and that they do not rely on human wisdom in teaching the flock of God the ways of genuine peace.—Matthew 24:45-47; 1 Peter 5:1-4.” (The Watchtower, 12/15/89, p. 6)

Example #5: “If we are Jehovah’s Witnesses, we should remember that our life and the lives of others depend upon our obedience. (1 Timothy 4:15, 16) Each Witness needs to keep pace with Jehovah’s organization. (The Watchtower, 3/15/91, p. 15)

The best way to show Jehovah’s Witnesses this error is to join with them in looking up scriptures that you know the Watchtower has misquoted (or referenced by citation as support for things they don’t really say) and asking two questions:

2 Comments on "How the Watchtower Misquotes the Bible"

One of WT’s most mystifying errors is their flagrant MISAPPLICATION of Revelation’s 144,000 . While I’m no Bible scholar, I’m pretty sure that the congregation of the 144,000 is exclusive to Revelation , as the 144,000 preachers who would proclaim Christ during the Tribulation period. This vast group will be a) ALL MALE and b) ALL JEWISH. How, in the name of Arthur Conan Doyle the WT can make people believe the 144,000 applies to the limited number of JW’s who would be allowed in heaven is a true mystery.
Reply   -   Share

If you read Revelation 7:1-4, it’s pretty clear that all of the 144,000 will be on earth at the same time at the start of the end times judgments. That means they aren’t in Heaven now and they weren’t people who lived centuries ago, as the WT claims.