Get Out of “Babylon the Great”! 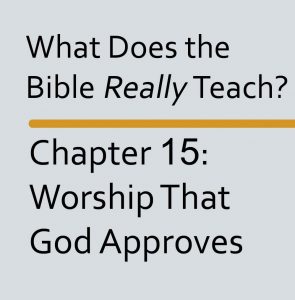 Acting under the assumption that by this point in your study you believe only Jehovah’s Witnesses practice the true religion, paragraph 15 (p. 151) of Chapter 15 urges you to take immediate action: “To be approved by God, not only must we believe in his existence but we must also do his will. We must also break free from false religion and embrace true worship.” END_OF_DOCUMENT_TOKEN_TO_BE_REPLACED

Paragraph 15 (p. 140) of Chapter 14 of “Bible Teach” states, “As this world becomes ever more wicked, children need parents who will protect them from people who seek to harm them, such as sexual predators.”

Here, you have a choice to make. You can either let that statement pass or you can engage the Witnesses on a very explosive subject. END_OF_DOCUMENT_TOKEN_TO_BE_REPLACED

END_OF_DOCUMENT_TOKEN_TO_BE_REPLACED 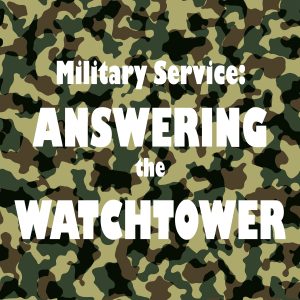 In discussing military service, Jehovah’s Witnesses will acknowledge that Jehovah directed Israel to engage in numerous wars in the Old Testament, but they will tell you that God’s arrangement has changed in the Christian era. In support of this contention, they often quote a number of Scriptures. Let’s look at them and see how to respond.

The Watchtower often cites 1 John 5:19: “We know that we are children of God, and that the whole world is under the control of the evil one.”

Second, if 1 John 5:19 means that military service is forbidden to Christians, then by the same reasoning almost every other occupation engaged in by “worldly people” would be forbidden as well.

The Watchtower’s other anti-military proof texts generally fall into one of three categories. Let’s look at the context of these passages.

This is not a declaration that nations should appease aggressors. If the nations had refused to use military force to stop Hitler, would they have been showing love toward his victims?

Here, Paul is talking about how he deals with spiritual conflict within the church. What Christians should or shouldn’t do with regard to military service isn’t under discussion at all.

Here, the topic is not military service but rather people living their lives motivated by envy and selfish ambition.

Category 2: God’s plans for Jesus and his disciples at his first coming

This describes Jesus’ actions in a particular situation. In no way is it a teaching against Christians serving in the military.

This directive was given in the specific context of Peter using his sword to try to prevent Jesus’ arrest. Jesus’ rebuke revealed that the arrest was a part of God’s plan. This does not mean that all Christians must willingly submit to attempts to take their life. In Acts 23:12-24, when Paul learned of a plot against his life, he had his nephew inform the Roman commander so he could use soldiers to thwart the plot.

The statement was a part of Jesus’ prayer that the Father would protect his disciples from Satan and opposers of the Christian gospel after he returned to heaven. It was not a teaching about Christians serving in the armed forces.

Category 3: How things will be different in the end times

Point out that while these things will happen someday, that day has not yet arrived. We are living in a fallen world where police and armies are still needed.

In fact, the topic of military service is specifically addressed in the New Testament. We will look at those passages next time.

Do you find my comments about the contexts of the Watchtower’s proof texts to be helpful? 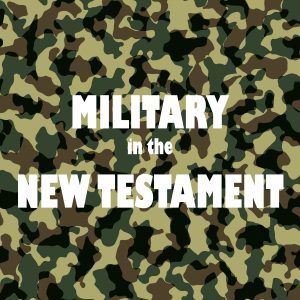 In discussing military service, with Jehovah’s Witnesses, I recommend that you say something like this: “I would like to get your take on several New Testament Scriptures that address the subject of whether it is possible to follow Christ and still serve in the armed forces.” END_OF_DOCUMENT_TOKEN_TO_BE_REPLACED