What Are You Relying On? 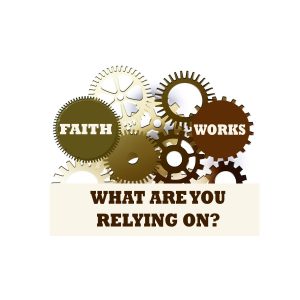 I think it’s important for us to make clear to Jehovah’s Witnesses that the relationship between faith and works is not just a matter of semantics.

People who rely on faith plus works for their salvation are not relying on Christ. They are really relying on themselves—trusting in themselves and in their efforts or in their standing with an organization run by fallible men.

All that misplaced reliance produces is condemnation, not salvation.

It is only when we humble ourselves, give up on ourselves and on everything else, and trust in Christ’s sacrifice alone that God saves us.

So the key to our salvation is reliance on Christ and Christ alone—trusting in his righteousness we receive as a gift rather than in our own righteous which we generate by our works.

You can illustrate this to Jehovah’s Witnesses through the life of the apostle Paul.

Jehovah’s Witnesses rely on their organizational standing and their works as their way of “exercising faith” in Jehovah.

That’s what convinces them they’re “in the truth.”

Don’t accuse them of anything, but do point out that when we think about works, we all need to be cautious in our evaluation.

People who haven’t experienced an inner transformation by God can, through self-effort, produce religious works that appear righteous to us, but those works will be rejected by God because merely human-generated righteousness is like filthy rags in his sight. (Isaiah 64:6)

Remember how righteous the Pharisees looked to men?

Yet Jesus said they were like whitewashed tombs—beautiful outside but spiritually dead inside. (Matthew 23:27-28)

Before his conversion, Saul of Tarsus was one of those spiritually dead Pharisees.

But he thought he was part of the one religious group on earth that really pleased Jehovah by their dedication and their works.

He says in Philippians 3:6 that in those days he had a righteousness based on law and that by that standard he was faultless.

Then he encountered Jesus on the Damascus road, and he saw his human-generated righteousness the way Jesus sees it.

And immediately he gave up on everything he had been relying on.

He had a miraculous inner transformation—spiritually, he died with Christ (Galatians 2:20) and experienced a new birth.

Saul the Pharisee was gone.

Paul the Christian was born.

And then God worked through that man and turned the world upside down.

What a great example of the biblical relationship between faith and works!

7 Comments on "What Are You Relying On?"

I just got 5 of your books to help my recently awakened ex-JW family. I too am awakened for less than a year. All 5 of us are being shunned. But now I feel so happy for learning about the real faith and my real hope. I want to help the indoctrinated JWs (including my husband) to wake up. But I can’t, the shunning blocks the communication. Now I know what salvation really means – and that Jesus Christ is front and centre in my life! Thank you for your work. Your site is incredible – I read it every… Read more »
Reply   -   Share

I’m glad to hear of your salvation! You mentioned 5 books. I’ve only written one — Getting Through to Jehovah’s Witnesses. Are you sure you aren’t thinking of David Reed’s books? He’s written a number of good ones. Whatever the case, thanks for your encouraging words.

Perhaps Betty meant she bought 5 copies to hand out to her relatives.
Likewise, thank you for these articles Pastor Englund!

You’re welcome, Rob. BTW, I’m not a pastor. Just a Christian. I did interim pastor a church once but that was more than 20 years ago.

Sorry if I misunderstood you, Betty. Please let me know how things go with the JWs you are trying to reach.